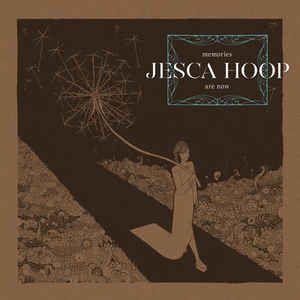 B1 Songs Of Old
B2 Unsaid

Released with a 4 page printed insert of lyrics, credits & photos, and a download code

"“Animal Kingdom Chaotic,” the centerpiece of Jesca Hoop’s fourth album, opens with a sound that may take a moment or two to identify. That clacking rhythm certainly sounds like an old-school typewriter rather than a computer keyboard, which may be her slyest joke in a song about life lived online. Memories Are Now sounds like her most complete and refined statement yet, a boisterously declarative album that’s urgent and at times seditious. As such, it can be unruly and unfocused, full of ideas half- and wholly formed, the occasional jarring transition, and a few interminable passages.

Memories Are Now, perhaps more than anything she has done in the past, is closely engaged with the present moment, yet so lyrically and musically idiosyncratic that it never sounds overtly political. The best moments possess a sense of intrigue, a subterranean conspiracy, as though she’s imparting dangerous knowledge to you.

Hoop’s most visceral assault is “The Coming,” which opens with a few measures of ambient guitar noodling, as though she’s gathering her thoughts or summoning her courage. As the song sprawls and contorts, Jesus resigns as Messiah and laments a tenure defined by double standards and misunderstood instructions." (Pitchfork)

"As riveting as it is reflective, the album, produced by Blake Mills (Fiona Apple, Alabama Shakes,John Legend, Laura Marling), is a fresh debut of sorts for Hoop, as the first of her solo records made outside of Tony Berg’s Zeitgeist Studios where she and Mills both cut their teeth in the art of record making under the guidance and support of Tony Berg." (BandCamp)