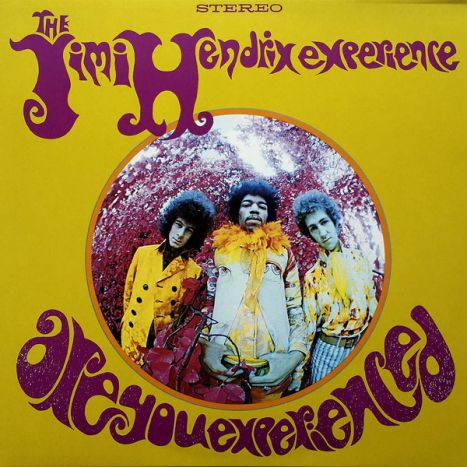 Text from the record jacket:


"Be forewarned. Used to be an Experience meant making you a bit older. This one makes you wider. With the assistance of Mitch Mitchell (on drums) and Noel Redding (on guitar), Jim Hendrix breaks the world into interesting fragments. Then reassembles it. You hear with new ears, after being Experienced. Those who've only seen him perform only know part of This Experience. They rave about a young man who plays a guitar in more positions than anybody before him. Now, this debut album will put the heads of Hendrix' listeners into some novel positions. Be forewarned."


With Hendrix's debut I feel like I am listening to a focused artist who has at least a couple albums under his belt. I must feel this way because it has gotten so much critical acclaim since its release. When I think of debuts, I think of albums that seem before their time and in turn lack the stand-out tracks that spawn commerial success. This album however, though it does contain those nessasary album tracks that I would expect to see on a debut, it also has many hit singles on it. Though hits mean success, the hits are also what more quickly fade away in terms of charm and listenability. That said, this album is certainly an eye opener but not for the reasons I would normally expect.
It opens my eyes because of the guitar playing mainly. It is a guitarist's pop record. It many times opens my eyes for its brilliant song writing too. This the the real reason I love the record. Hendrix was best at writing songs in my opinion. His first two records never captures his brilliance as a guitarist. They were/are good because of the great songs.

If this record were to have great song after another on it it would get five stars. It doesn't though. The "original" singles, the songs that sparked his success, are the songs that lack. Sure, Fire and Purple Haze have pleasing riffs but they lack depth. Even Foxey Lady gets boring after repeated listens. It is instead the songs like the fantastic cover of Hey Joe, The Wind Cries Mary, Manic Depression, and Thrid Stone From The Sun that shine through and through.


Jimi Hendrix - Are You Experienced

the best guitarist who ever walked the earth.

This piece of archive dates back from april 1967 and was recorded in Ipswich, England. You can see the band play "Purple Haze", shot from the right side of the stage (A single shot cam) This is very rare material

Jimi Hendrix dramatically expanded the scope of the blues without violating its purity. This is an astonishing artistic achievement, in my opinion. Listen to his brilliance here. Don't let the visual displays distract you from what he is playing. His guitar solo - every moment of it - is a tour de force of the purest blues expressions expanded into Jimi's unprecedented musical concepts.
He died forty years ago. But, he is still intensely alive in my mind and in the minds of musicians everywhere.

Good to see the animation & acidic background coloring patterns & historic footage. Just a classic production for the Jimi Hendrix estate. He was one of the best, not to mention the director Fred Stuhr of this video, who also did many other videos like, Tool's "Sober", & "Prison Sex" & Boingo's"Insanity" as well as a host of many others. Enjoy a true classic video from two past legends