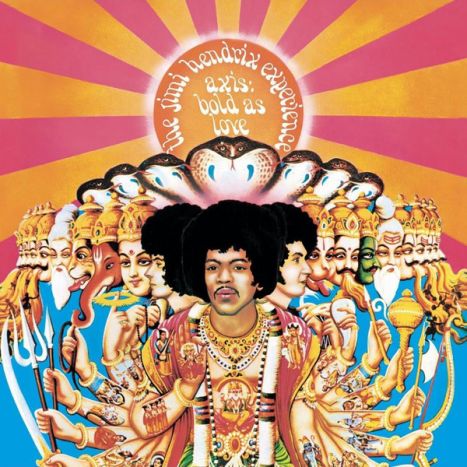 The last recording by Jimi Hendrix to have a dedicated mono mix, Axis was only released in the UK and the US.


Axis: Bold as Love is the second studio album by The Jimi Hendrix Experience. Under pressure from their record company to follow-up the successful debut of their May 1967 album Are You Experienced, Axis: Bold as Love was released on Track Records in the UK in December 1967. It reached #5 in the UK and later, #3 in the US.

The album was recorded to fulfill the band's contract, which stated that they must produce two albums in 1967. Even so, it was not released in the USA until 1968 due to fears that it might disturb the sales of the first album. Bassist Noel Redding has noted that this was his favourite of the three Experience albums. He plays eight string bass on some tracks.

Just before the album's completion, Hendrix left the master tapes of side 1 in a taxi. They were never found again, and thus the A-side had to be mixed again quickly.


In only a few short months after the landmark Are You Experienced? was released, Jimi and his Experience created another musical triumph in the form of Axis: Bold as Love. While AYE was a solid but somewhat rough sounding collection of mostly road tested tunes like "Purple Haze" and "Fire", ABaL was an absolute marvel of studio-born songs with sound quality that amazes to this day. If you had no knowledge of Hendrix and found yourself listening to Axis, you'd think it was recorded last week instead of 1968.

2. Up From the Skies - A wah-wah drenched jazzy number that displays Hendrix's affinity for science fiction. Check out Mitchell's drumming.

3. Spanish Castle Magic - This song really doesn't need an introduction. Everybody from the Spin Doctors to Yngwie Malmsteen covered it.

4. Wait until Tomorrow - A funny little number about Jimi trying to run off with his sweetheart only to be told by her to "wait until tomorrow"; except for when her father shoots him.

5. Ain't no Telling - The most rocking song on Axis. It isn't even two minutes long and it has more twists than the hourly production at a pretzel factory.

6. Little Wing - The classic ballad with one of the most recognizable intros ever. You should also hear Stevie Ray Vaughan's version as well.

7. If 6 Was 9 - Hendrix's ode to being yourself even if the rest of the world changes. One of Hendrix's heaviest songs.

8. You Got Me Floatin' - A great pop love song with Hendrix's signature guitar feedback effects.

9. Castles Made of Sand - A simple little song about how plans don't always work out and how sometimes it's for the best.

10. She's So Fine - Bassist Noel Redding sings here like he would later on "Little Miss Strange" on Electric Ladyland. The weakest song on Axis, but it's still good.

12. Little Miss Lover - Hendrix played funk before people knew what funk was. Even a die-hard rap fan could fall in love with Mitchell's drumming.

13. Bold as Love - The majestic title track and album finale about someone whose feelings are in conflict with one another, yet it is love that prevails over all. Just ask the Axis...


An early peak in the painfully short career of the greatest guitarist ever. Axis: Bold as Love was a mind blowing journey through the uncharted sounds and emotions of an artist sharing his pure soul. Love was to be the axis of the new galactic order Jimi envisioned, with his music serving as the otherworldly vehicle designed to take us there at 33 1/3 rpm. Innovative beyond compare, Jimi made extraordinary use of the limited 4-track technology at his finger tips, crafting a complex and pivotal album of enduring brilliance. With "Little Wing," "Castles Made of Sand," and "One Rainy Wish," Jimi showed himself capable of creating gently textured songs of poetry that were no less powerful and compelling than the more jamming tunes like "Spanish Castle Magic." On the electrifying "If 6 Was 9," Jimi righteously sets forth the philosophy he lived by: "I'm the one who's gonna die when it's time for me to die/So let me live my life, the way I want to..." In the jazzed "Up From the Skies," Jimi sings of the world from the point of view of an extraterrestrial brother hovering high above the clouds. He brings his inventiveness to bear on the solid rhythm and blues of "Ain't No Telling," "You Got Me Floatin', and "Little Miss Lover," songs which were shamefully ignored by most R&B radio stations across the United States. Although largely appreciated by a white audience, Jimi really expanded the possibilities of black music, paving the way for the heavy funk explorations of Miles Davis, Curtis Mayfield, Funkadelic, and others. Although Jimi was raised to the status of a rock god, he did a hell of a lot more than simply rock. Axis: Bold as Love covers a nearly cosmic spectrum of sounds, violating musical conventions, and defying what was once thought possible in the realm of the electric guitar and recorded music. It still has one of the all-time best endings of any album, with the title track "Bold As Love" closing out the record in a sweeping climax. An essential recording for all collections.


Jimi Hendrix - Castles Made of Sand

One of my most beautiful songs ever written,
this has to be his finest ever live performance of ANY song.