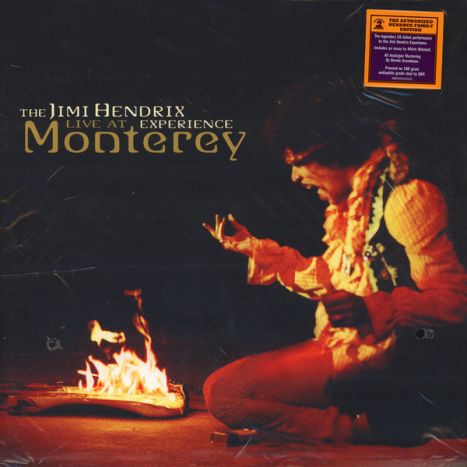 Includes an essay by Mitch Mitchell.
All Analogue Mastering by Bernie Grundman.
Pressed on 180 gram audiophile grade vinyl by QRP.

There are certain moments in rock history that are just monumental and this is one of them, Jimi Hendrix's coming out party to US audiences at the legendary Monterey Pop Festival in June, 1967.

"The Jimi Hendrix Experience Live at Monterey" (10 tracks, 43 min.) brings the band's performance at the festival it its totality. After a quick announcement from the Rolling Stones' Brian Jones, the band crashes in with "Killing Floor", a ground-scorcher of a song. "Foxy Lady" follows and after it Jimi delivers some great stage banter, as he does throughout the band's set, making this such a delight. The band's cover of "Like a Rolling Stone" is a gem. After a great "Rock Me Baby", Jimi asks the audience to indulge the band for fine-tuning his guitar, "Let us tune up because we care", what a great statement! The set closes down with "The Wind Cries Mary", which Jimi announces as the next single to some out (following the hit "Hey Joe"), and it ends with the now legendary "Wild Thing", featuring the guitar burning.

Couple of thoughts as I was listening to this: for one, the audience's response was timid at best, you can hardly hear any crowd reaction between songs. For another, this is the Jimi Hendrix Experience at its best, nevermind the many other live recordings out there. It wasn't possible at that time to register or recognize the importance of this live set, but this is a true defining moment in rock history. In a way, it has been cheapened by the overwhelming attention that the guitar-burning segment has gathered, but the full set as heard here just demonstrates what a defining moment this was for Hendrix and indeed rock history.