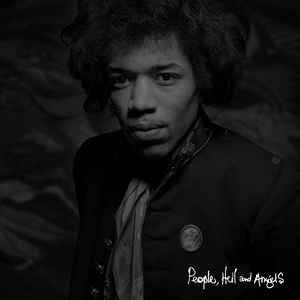 
All songs published by Experience Hendrix L.L.C. (ASCAP) except: Tracks B1 and D2


People, Hell & Angels is a 2013 album of twelve never before released Jimi Hendrix studio recordings. This special album showcases the legendary guitarist working outside of the original Jimi Hendrix Experience trio. Beginning in 1968, Jimi Hendrix grew restless, eager to develop new material with old friends and new ensembles. Outside the view of a massive audience that had established the Experience as rocks largest grossing concert act and simultaneously placed two of his albums together in the US Top 10 sales chart, Jimi was busy working behind the scenes to craft his next musical statement.

The best parts of PEOPLE, HELL AND ANGELS feature Jimi Hendrix lending his voice and guitar to the songs on this collection without a lot of extra instrumentation intruding. Although there seems to be some restraint to Hendrix's playing, it should be remembered that a lot of the archival selections on PEOPLE, HELL AND ANGELS were works in progress or experiments. Fans familiar with Jimi's soaring lead playing during jams and solos in live performances will recognize the groove right away, and be able to differentiate it from the repetitive but memorable licks in the riff and motif driven songs (Purple Haze, Burning of the Midnight Lamp, etc.) that made Jimi Hendrix famous.

In no sense is PEOPLE, HELL AND ANGELS a 'lost' Jimi Hendrix album. It's more like a mini anthology of largely lesser known songs that show what Jimi was trying to do when he stepped out of the confines of playing and recording with the Experience.

Several of the numbers chosen for PEOPLE HELL AND ANGELS have been heard in different forms on other posthumous releases. Hear My Train a Comin' Bleeding Heart, Izabella and Crash Landing are among these. I expect that the studio version of Hear My Train a Comin' with its Experience-like rhythm and structure will be a standout track for many listeners.

Buddy Miles, Billy Cox, and Mitch Mitchell are among the backup musicians who surface on the 1968 and 1969 recordings that were picked for PEOPLE, HELL AND ANGELS. There are also a couple of numbers that feature Hendrix in background mode with saxophones, brass, and even a guest vocalist (Lonnie Youngblood, in whose band Hendrix had once played) taking centre stage. By the way, Let Me Move You--the collaboration with Youngblood--sounds a lot better than any of the Jimi-as-sideman songs