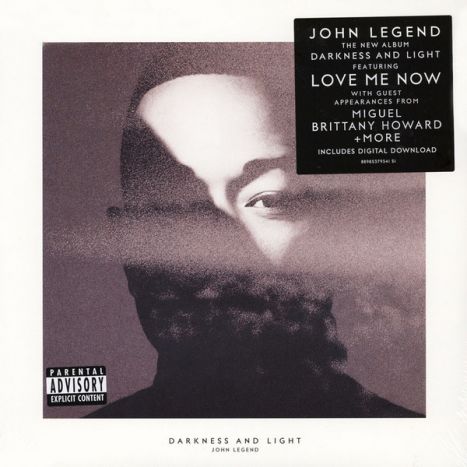 A1 I Know Better
A2 Penthouse Floor
Featuring – Chance The Rapper

"John Legend doesn’t waste time getting to the point of Darkness and Light, his fifth solo album. On “I Know Better,” the record’s gospel-infused opener, the singer refutes the celebrity he’s acquired to date: “Legend is just a name, I know better than to be so proud/I won’t drink in all this fame/Or take more love than I’m allowed.” At this stage of his career—which includes 10 Grammy awards, a Golden Globe, and an Academy Award for Best Original Song—Legend could’ve continued to play it safe; his mix of secular and spiritual soul has taken him far over the years. But on Darkness and Light, Legend pushes beyond his comfort zone for something a bit more ambitious.

With its meditative and ingratiating songwriting, this is unmistakably a John Legend album, yet there’s a renewed sense of peace and even a sad wisdom that distinguishes it. He sings lovingly of his infant daughter, Luna, wondering who she will become as she grows older. He ponders the different sides of love, and the raw emotions they evoke. He's made a love record about navigating the bleak world and finding happiness in dark times.

For Darkness and Light, Legend reached out to Blake Millsafter hearing what the producer did for Alabama Shakes’ breakout LP, Sound & Color. In turn, Mills wanted to push Legend to the limits of his emotional range. “There was this hole in John’s material that I felt like a huge part of his personality could come through,” Mills recently told Billboard. “We’re still talking about ‘What’s Going On’ some 40 years later. Yes, ‘Sexual Healing’ is a great track. But when we think of Marvin Gaye, ‘What’s Going On’ is the song that comes up.” The implicit criticism there rings true: Legend has calling-card songs like “Ordinary People” and “All of Me,” yet by and large, he makes safe R&B that doesn’t resonate long-term or hit hard politically (he released a collaborative LP with the Roots in 2010, but those were covers of Curtis Mayfield, Nina Simone, and Bill Withers.)

For Darkness and Light, Mills wanted to merge Legend’s artistic and political sides, bringing the opinionated guy we see on “Real Time With Bill Maher” to the forefront. We hear shades of this on “Penthouse Floor,” a standout featuring Chance the Rapper, even if the grooving track behind Legend still feels more sultry than angry as he wonders: “All this trouble in this here town/All this shit going down/When will they focus on this?/Streets fired up with the TV crews/Look, Ma, we on the news!/But they didn’t notice before this.”

Conversely, on the Miguel-featured “Overload,” Legend reflects on his marriage to model Chrissy Teigen, running down the endless distractions posed by the shiny device in his hand as a metaphor for connection (“Let that cell phone ring/Let that blue bird sing/Let that message say ‘unread.’”) The album comes full circle near the end, on “How Can I Blame You,” in which Legend is pulled over for a traffic violation—but instead of a menacing encounter, or a meditation on the rash of police shootings of black men during traffic stops, Legend uses the moment as a metaphor for life’s rapid pace. He’s urged to slow down and appreciate what he has. In the end, Darkness and Light isn’t the political feat Mills and Legend had hoped for, but it’s a step forward in the singer’s evolution. He may never be a firebrand, but Legend proves there’s still strength in humility." ( pitchfork)