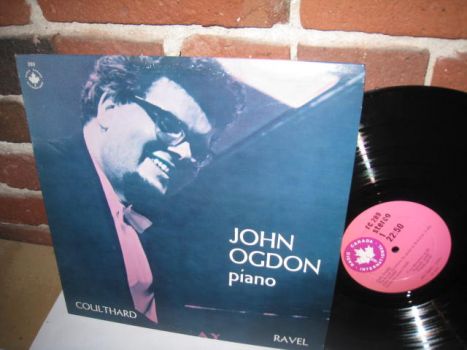 Theme and Variations for Piano 7:50
on BACH

Ogdon was born in Mansfield Woodhouse, Nottinghamshire, and attended Manchester Grammar School, before studying at the Royal Northern College of Music (formerly, The Royal Manchester College of Music) between 1953 and 1957, where his fellow students under Richard Hall included Harrison Birtwistle, Alexander Goehr, Elgar Howarth and Peter Maxwell Davies. Together they formed New Music Manchester, a group dedicated to the performances of serial and other modern works. His tutor there was Claud Biggs. As a boy he had studied with Iso Elinson and after leaving college, he further studied with Gordon Green, Denis Matthews, Dame Myra Hess, and Egon Petrithe latter in Basel, Switzerland.

John Ogdon was able to play most pieces at sight and had committed a huge range of pieces to memory. He wanted to record the complete piano works of Sergei Rachmaninoff (which constitute about 6-full length CDs), but only recorded about half of them,and those recordings were released in 2001. He recorded all ten Scriabin sonatas early in his career. Ogdon was also a formidable exponent of the works of Alkan and Busoni. In more familiar repertoire, he revealed deep musical sensibilities, always buttressed by a colossal technique. He also recorded a number of duo-piano works with his wife, Brenda Lucas (aka Brenda Lucas Ogdon).

On 2 February 1969, on British television, he gave the first modern performance of Edward Elgar's Concert Allegro, Op. 46. The piece was never published and the manuscript had long been believed lost, but it came to light in 1968. Ogdon and Diana McVeigh developed a performing version of the piece from Elgar's manuscript, which was full of corrections, crossings out and additions.

His own compositions number more than 200, and include 4 operas, 2 large works for orchestra, 3 cantatas, songs, chamber music, a substantial amount of music for solo piano, and 2 piano concertos, the first of which he recorded. The majority of his music was composed for the piano. These include 50 transcriptions of works by composers as diverse as Stravinsky, Palestrina, Mozart, Satie and Wagner. He also made piano arrangements of songs by Cole Porter, Jerome Kern and George Gershwin. He also wrote sonatas for violin, flute and cello, all unaccompanied. A planned symphony based on the works of Herman Melville, and a comic opera, were left unfinished. The original manuscripts of many of John Ogdon's compositions now reside at the Royal Northern College of Music Library Catalogue.

Jean Coulthard, OC OBC (February 10, 1908  March 9, 2000) was a Canadian composer and music educator. She was part of a trio of women composers who dominated Western Canadian music in the twentieth century: Coulthard, Barbara Pentland, and Violet Archer. All three died within weeks of each other in 2000. Her own work might be loosely termed "prematurely neo-Romantic", as the orthodox serialists who dominated academic musical life in North America during the 1950s and 1960s had little use for her. Some of her well-known compositions include Cradle Song, Threnody, Canadian Fantasy, Ballade "A Winter's Tale" and her opera Return of the Native.


Born in Vancouver, British Columbia, Coulthard was the daughter of Jean Blake Robinson Coulthard, a prominent and influential music teacher in Vancouver. Through her mother she received her earliest musical training and was introduced at an early age to the work of French composers like Claude Debussy and Maurice Ravel, both of whom were lifelong influences. From 1924-1928 she studied the piano with Jan Cherniavsky and music theory with Frederick Chubb. A scholarship from the Vancouver Woman's Musical Club enabled her to pursue studies at the Royal College of Music in 1928-1929 where she was a pupil of Kathleen Long, R.O. Morris, and Ralph Vaughan Williams. She studied in the 1930s and early 1940s with such composers as Béla Bartók, Aaron Copland, and Arnold Schoenberg. In 1944-1945, Coulthard worked for an entire academic year with Bernard Wagenaar of the Juilliard School, New York.

Beginning in 1925, Coulthard taught the piano privately in her mother's studio, and then as an independent teacher (19351947). In 1947 she joined the fledgling Department of Music in the Faculty of Arts of the University of British Columbia. The head of the department, Harry Adaskin, hired first Coulthard, and then (in 1949) Barbara Pentland, to teach theory and composition. Coulthard taught composition in the department, and later (from 1967) in the administratively distinct UBC School of Music (19671973). In 1956-7, she spent a year in Paris and in Roquebrune, southern France, beginning an opera and completing several substantial chamber and vocal works. A later sabbatical in London permitted Coulthard to work in a sustained way with Gordon Jacob, the British composer and orchestrator.

In 1978, she was made an Officer of the Order of Canada. In 1994, she was awarded the Order of British Columbia. In 1997, her portrait was painted by Canadian artist Christian Cardell Corbet, Coll. Vancouver Academy of Music.
More Information
Please sign in with your email address or Create an Account.
New Products
Compare Products
Compare
Clear All
You have no items to compare.
My Wish List
Last Added Items
Go to Wish List
You have no items in your wish list.
Vinyl Records Vancouver
Categories
Help
Quick Link
Newsletter