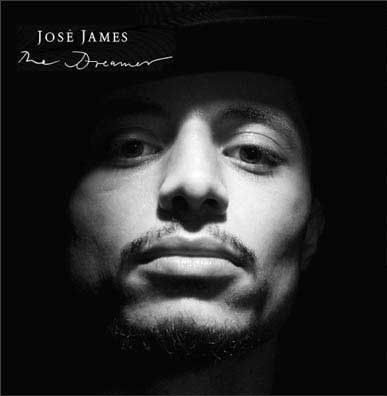 Record Store Day 2019/Ltd. to 1000: The Dreamer was first released on vinyl by Brownswood Records in 2008 and became an instant collector's item. It's been out of print in the US for many years. They did a limited re-release in 2015 in EU only. This version will be a newly remixed and remastered version with 4 bonus tracks - 2LP, 180g black vinyl.

A1 The Dreamer
A2 Velvet
A3 Blackeyedsusan

' The jazz voice of a generation, Jose James released his debut LP The Dreamer in 2007 on Brownswood Recordings. It was crammed with smoky, low-slung jazz grooves blessed with Jose's rich baritone vocals - magnificent self-penned works nestling alongside uniquely crafted cover versions of John Coltrane,( great trk " Equinox" )  Rashaan Roland Kirk and even West Coast hip hop institution Freestyle Fellowship. Pursuing the same deeply soulful vocal jazz tradition exemplified by Babs Gonzales, Billie Holliday, Joe Williams and Leon Thomas, The Dreamer quickly cemented Jose's stature and raw talent within the worldwide jazz community, and beyond. Since The Dreamer Jose has performed in maybe 30 countries, worked with some of the best, wisest and finest artists in the world such as Chico Hamilton and Junior Mance and he has built a community of friends and fellow music-lovers all over the globe. T
"faves are the title cut where homage is paid to Rev Dr MLK Jr the ultimate Dreamer and the cut Park Bench People where he talks about the day in the life of a homeless person. "