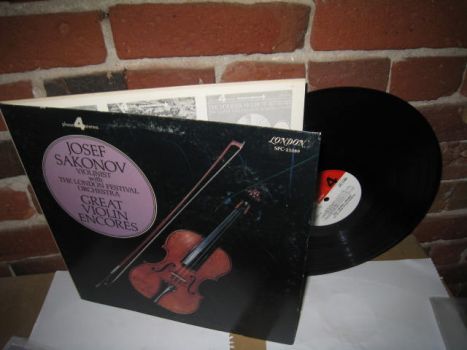 Violinist with The London festival Orchestra -

Tchaikovsky - -None nut the Lonely Heart

Sidney Sax (born 1913, died 2005) was a leading violinist in London's session musician circles. In addition to being an eminent and influential orchestral leader he was also contractor, 'fixing' the personnel for recording sessions. In 1964 he was the joint founder of the National Philharmonic Orchestra, London together with Charles Gerhardt.

The National Philharmonic Orchestra, which was later incorporated in 1970, was a freelance orchestra that boasted amongst its players some of the leading musicians from all the London orchestras. It was not unusual to find that Sax had contracted the leaders of most of London's orchestras to populate his first violin section

The most popular of Tchaikovsky's many songs is "None but the Lonely Heart." It is beautifully played here played by Josef Sakonov in an arrangement by his 'alter ego,' Sidney Sax, founder of the Symphonica of London and the National Philharmonic Orchestra. Sakonov/Sax himself directs the London Festival Orchestra in a recording made at the Decca Studios, West Hampstead, in 1972.
More Information
Please sign in with your email address or Create an Account.
New Products
Compare Products
Compare
Clear All
You have no items to compare.
My Wish List
Last Added Items
Go to Wish List
You have no items in your wish list.
Vinyl Records Vancouver
Categories
Help
Quick Link
Newsletter