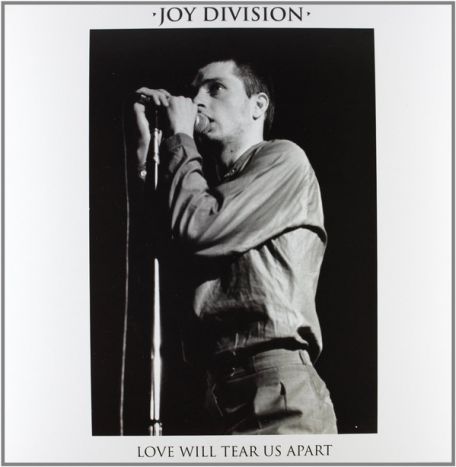 For a band that was to release only one album before the death of its lead singer, Joy Division has had an incredible influence on the past 15 years of popular music. Ian Curtis committed suicide on May 18, 1980. The following month, Love Will Tear Us Apart was released, the song that was to be the band's most successful work.

It would also be one of the most covered, and copied, songs of the 1980s.
Joy Division's dark, atmospheric sound would be echoed in the work of such acts as the Cure, , Echo and the Bunnymen, and more recently Nine Inch Nails, not to mention the countless gothic bands that have tried to imitate Joy Division's pounding drums, dreamy guitar, and Ian Curtis' distant vocal style.

Another point worth noting is that Joy Division was the band that put Manchester indie label Factory Records on the map.
Factory would play an important role in the spread of the new wave sound, overseeing early works of such bands as Big in Japan, Echo and the Bunnymen, and Cabaret Voltaire.

Joy Division's genius can be heard most directly in the works of the remaining members of the band, who have been hugely successful under the name New Order. Bernard Sumner has also worked on a number of other projects, the most notable of which being Electronic, sharing the bill with Neil Tenant and guitar god Johny Marr.

In May 2007, NME placed it at number 19 in its list of the 50 Greatest Indie Anthems Ever, one place ahead of another Joy Division song, "Transmission". The song reached number 1 in the inaugural Triple J Hottest 100 music poll of 1989 and again in 1990.

When being interviewed for New Order Story, Neil Tennant of the Pet Shop Boys stated that "Love Will Tear Us Apart" was his favourite pop song of all time. He also mentioned several New Order songs in the same dialogue.

The song has also been used in television programs and in films, such as the 2001 film Donnie Darko, in a pivotal scene before Donnie has to leave his girlfriend in order to save her.
The song is included in the indie film Wristcutters, which takes place in an afterlife for people who have committed suicide.
It was also included in a film about the Manchester music scene, 24 Hour Party People, during several scenes about the band and Curtis's suicide.
It is heard in the Doctor Who episode "School Reunion". The film Series 7: The Contenders features a music video for the song which characters explain as being part of a school project.

Their homemade music video is in the style of a cheaply made '80s video with actors dressed in stereotypical goth fashion.
In the sci-fi comedy radio series Undone, the song is performed as a chime on an ice cream van.
On November 11, 2009 it was featured in the opening scene of episode 7 of season 5 ("The Performer") of the television series Criminal Minds. "Love Will Tear Us Apart" was also featured at the beginning of UK police drama, Silent Witness in the episode "Voids: Part 1". The song is featured in the American Dad! episode "Escape from Pearl Bailey".

An edited version of the chorus is sung by Manchester United fans about winger Ryan Giggs ("Giggs, Giggs will tear you apart again"). A similar version is sung by the Barmy Army, English cricket's official supporters group when spinner Graeme Swann is bowling.

"Love Will Tear Us Apart" was eventually performed by New Order (though not for 18 years after Curtis's suicide) and has been covered by many artists including Thom Yorke, Mark Owen, Björk, Nerina Pallot, Hawksley Workman, Calexico, Bloc Party, The Cure, Swans, Unbroken, Broken Social Scene, Nouvelle Vague, Heavens, Fall Out Boy, José González, Red Mecca, Yat-Kha, Stanton Miranda, U2, John Frusciante, Arcade Fire, REVERE, Squarepusher, Honeyroot, Chris Edwards, Susanna and the Magical Orchestra, Moonspell, The Blood Divine, Simple Minds, Oysterband with June Tabor, Paul Young, Jamie Cullum, Evelyn Evelyn and In the Nursery.
The song "Let's Dance to Joy Division" by UK act The Wombats was inspired by "Love Will Tear Us Apart", and includes "let love tear us apart" in the lyrics; similarly, Kasper Bjørke's song "Alcatrez" references "Love Will Tear Us Apart": "Do you think it's true that our love will tear us apart?"