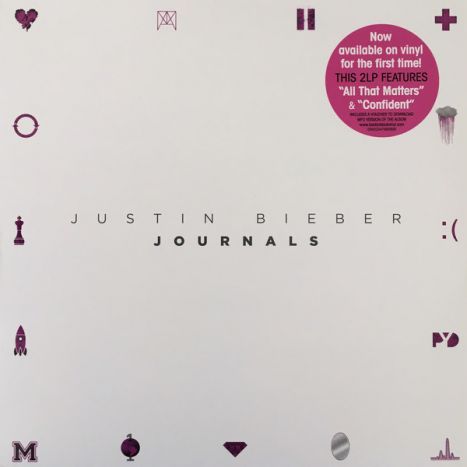 It includes favorites, 'All That Matters' & 'Confident'

Take All That Matters, for instance: A sharp guitar lick, stuttering drum arrangement and haunting vocal sample serve as the backdrop for a terrific performance from Bieber, who oscillates between cocky rapping to devastated crooning on the track. Roller Coaster is one of Biebers funkiest tracks to date, a warped disco romp with a legitimately surprising bridge and hook that never slows down. And PYD, his five-minute R. Kelly duet in which the Biebs goes toe-to-toe with the genre king? Theres nothing else quite like it in Biebers discography.


Journals is the second compilation album by Canadian recording artist Justin Bieber.
In addition to the songs released on "Music Mondays", Journals is also composed of other five previously unreleased songs. The recording sessions took place between 2012 and 2013, while the singer was on his Believe Tour, which generated one or two songs a day throughout the entire tour.

To achieve a more mature sound, Journals sees Bieber working with a variety of different R&B producers, such as The Audibles, Jason "Poo Bear" Boyd, Andre Harris, D.K. the Punisher, Soundz, Chef Tone, T-Minus, as well as his previous producers Maejor Ali, Diplo, Rodney "Darkchild" Jerkins and Sir Nolan, while collaborating with R&B and hip-hop artists and rappers, such as Future, R. Kelly, Chance the Rapper, Big Sean and Lil Wayne. An R&B album with pop influences, Journals mostly deals with themes of heartbreak and forgiveness in a romantic relationship. It was suggested that Bieber's relationship with former girlfriend, actress and singer Selena Gomez,
More Information
Please sign in with your email address or Create an Account.
New Products
Compare Products
Compare
Clear All
You have no items to compare.
My Wish List
Last Added Items
Go to Wish List
You have no items in your wish list.
Vinyl Records Vancouver
Categories
Help
Quick Link
Newsletter