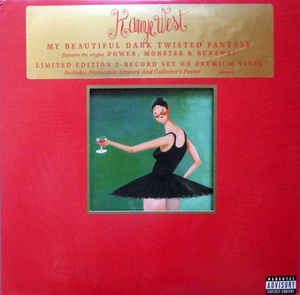 
Let's get it out of the way up front: If you even tangentially follow the hip hop blogosphere or Twitterverse, you've heard almost all of the substantive tracks on this album (two of the 13 tracks are an interlude and outro). Fully five of the 11 songs were part of Kanye's G.O.O.D. Fridays scheme, another three leaked months ahead of the album's release, and "Dark Fantasy" was included in Kanye's recent short film. But does it matter? Maybe Kanye's done the impossible and crafted an album so good that we'll pay for it even when he gives it away for free.

After listening to the record you'll appreciate how succinctly the album's title summarizes its themes. The record is framed as a fairy tale and the first few lines ("The watered down one, the one you know/ Was made up centuries ago...Twisted fiction, sick addiction/ Gather around children, zip it, listen) almost allude to the gradual censorship of the Brothers Grimm's dark fairytales over the centuries. On My Beautiful Dark Twisted Fantasy, Kanye seeks to dismantle the facade of fame and fortune to reveal the twisted debauchery underneath.

Kanye's trademark arrogance is in full force on this album. But this time it's an unapologetic arrogance that's a product of being treated like a god on earth. On "Devil in a New Dress" he rhymes "It's hard to be humble when you're stuntin' on a jumbotron" and on "POWER" "I embody every characteristic of the egotisic, he knows he's so gifted." The occult is another central theme, not only in track titles like "Devil in a New Dress," "Monster" and "Hell of a Life" but in the bars on each record. Kanye offers "We headed to hell, for heaven's sake huh?/ Well I'mma levitate and make the devil wait, yeah."

Perhaps the most personal theme on the album is a feeling of dissatisfaction in the face of so much commercial and critical success. We hear it on "Runaway" ("I always find something wrong/ You've been putting up with me just way too long/I'm so gifted at finding what I don't like the most"). And while Kanye keeps up the pretense of ego (see above) it's clear that the endless criticism has forced chinks in his armor. There are unveiled jabs at both Saturday Night Live and South Park, and bars including "It's not funny anymore, try different jokes," and "I was lookin' at my resume, feelin' real fresh today/ But they rewrite history, I don't believe in yesterday."

In short, the album is brilliant. The rhymes are clever, the music is rich, the emotions are raw and the themes are dark. My Beautiful Dark Twisted Fantasy will be an interesting experiment in an age of dwindling album sales ostensibly due to piracy. If Kanye can move 800,000 units in his first week despite having given the album away, the power of good music will be proven and artists will have no one to blame but themselves.

the production is a masterpiece for hip hop.

Kanye made a 30min video/movie