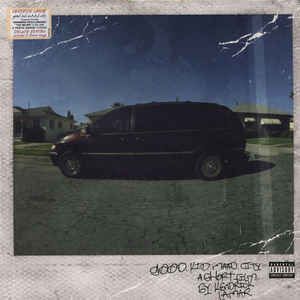 A4 The Art Of Peer Pressure


C2 Sing About Me, I'm Dying Of Thirst

Left of center, he joins the likes of Drake and KiD CuDi, paving his own pathway. Good Kid m.A.A.d City is not only one of 2012's best rap albums but also one of the year's `crowning achievements.'

Conceptually structured around its title - Kendrick is ultimately a good kid trapped in Compton, which is chucked full of vices within the sins/demons of a bad, rough city - Lamar details his early life experience.

"Sherane a.k.a. Master Splinter's Daughter" opens with a prayer that ultimately alludes to the title of the album. Featuring soulful, old-school production by Tha Bizness, "Sherane a.k.a. Master Splinter's Daughter" finds Kendrick narratively lusting for a 'no-good' girl. Lamar's rhymes are agile and well conceived, eliminating need for a hook (there is none). As customary throughout the effort, an interlude (skit) foreshadows successive tracks, much like a novel.

On "B*tch, Don't Kill My Vibe," producer Sounwave's production incorporates a Boom Clap Bachelors sample ("Tiden Flyver"). Over a lush, west coast characteristic sound, Lamar is on autopilot, admitting his improprieties while also admonishing anyone to attempt to block his individuality as a person and artist. Lamar's vocal inflections and athletic flow help to make this cut another brilliant contribution.

"Backseat Freestyle" sports some of Hit-Boy's best production work. The Intro/outro is particularly notable by Lamar: "Martin had a dream, Martin had a dream, Kendrick have a dream..." Lamar's hook is equally confident, where he desires 'money,' 'power' and 'respect,' with more colorful terminology of course. Lamar remains relevant and uncompromising, managing themes of childish fodder (desiring material things like money) yet also lofty self-esteem and aspiration ('I can be the greatest').

"The Art of Peer Pressure" begins with production yielding a 'stoner' vibe. It changes upon the first verse, accelerating the tempo and opting for a less lush/lazy sound. Playing like the `tone poem' it is, unpredictability here parallels `unpredictability' of peer pressure. The outgoing interlude, confirms this notion, referencing drug-use. "Money Trees," produced by DJ Dahi, samples indie-pop band Beach House ("Silver Soul"). The cut continues to possess a characteristic west coast vibe. Jay Rock guests on verse three ("Dreams of me getting shaded under a money tree...") while Kendrick holds it down with numerous clever lines ("I f___ Sherane then went to tell my bros/then Usher Raymond "Let it Burn" came on...")

"Poetic Justice" eclipses the former two cuts, featuring Drake in top-notch form. Lushly shaped by Janet Jackson's "Any Time Any Place," Scoop's production is terrific. Anchored by a simple, though effective hook ("You can get it...and I know just, know just...what you want/poetic justice, put it in a song"), "Poetic Justice" is one of the album's strongest moments.

"good Kid" is produced by Pharrell Williams and features Chad Hugo (The Neptunes) on the hook. Soulful yet mysterious, as always, Kendrick continues to compel and lure in the audience. Companion track "m.A.A.d City" contrasts "good kid's" soulfulness in favor of harder production. Kendrick's rhymes are incredibly emotional while fellow Compton rapper MC Eiht delivers a compelling verse. Both "good Kid" and "m.A.A.d City" are `A' cuts, like the majority of good Kid m.A.A.d. City.

Breakthrough single "Swimming Pools (Drank)" finally appears, featuring exceptional production work from standout T-Minus. Kendrick Lamar manages to tie swimming pools and alcohol together incredibly, most notably on one of 2012's most memorable rap hooks: "...why you babysittin' only two or three shots? I'mma show you how to turn it up a notch/first you get a swimming pool full of liquor, then you dive in it/pool full of liquor, then you dive in it..." Despite its reprised greatness on the album, "Swimming Pools" may not even be the album's best song!

"Sing About Me, I'm Dying of Thirst" clocks in at an incredible twelve-plus minutes. The first portion ("Sing About Me") samples jazz guitarist Grant Green. "When the lights shut off/and it's my turn to settle down/my main concern, promise that you will sing about me..." Lamar sings on the hook, matching the mysterious, somber vibe of the cut. The next portion, "I'm Dying of Thirst," contrasts the production and opts for quicker tempo. Quite mysterious though captivating, "I'm Dying of Thirst" loses no momentum A notable skit closes the cut, in which Kendrick's grandmother urges Kendrick and friends they are `dying of thirst' in relation to their `faith.' Cleverly, the opening prayer from "Sherane" is placed in context.

"Real" proceeds, featuring lush and soulful production. Not the cream of the crop, "Real" is above average. Closing cut (standard edition) is third single "Compton," featuring Dr. Dre. Produced by Just Blaze, "Compton" samples Formula IV ("What's This World Coming To"). Kendrick and Dre cleverly split verses, ultimately summing up the sentiment of "Compton" via its hook: "Compton, Compton, ain't no city quite like mine..." The Deluxe Version includes additional cuts, most notably single "The Recipe," also featuring Dr. Dre.


I listen to this album everyday and it never it gets old. Hip Hop at its finest


Kendrick Lamar - Sing About Me, I'm Dying Of Thirst