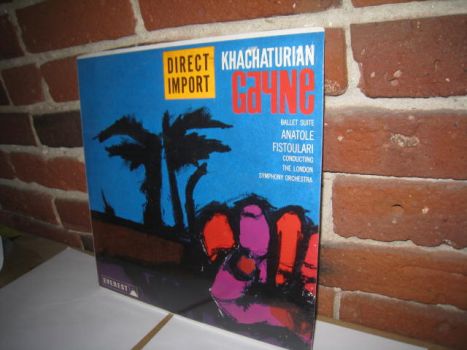 Skip to the beginning of the images gallery
Details
Khachaturian - Gayne


Aram Khachaturian (1903-1978) has written some of the most recognizable music this century, especially the "Sabre Dance" from Gayne (1942), which has appeared in everything from movies, cartoons, television shows, even commercials. What we miss, of course, is all the other good music in the rest of the suite, which is what we have here.

This forty-six-minute suite starts off with the "Sabre Dance" but moves immediately into a softer stateliness that calms everything down. And speaking of movies: "Gayne's Adagio" was used by Stanley Kubrick in 2001: A Space Odyssey--the spaceship all alone in space. Spooky and sad at the same time.

This is THE audiophile benchmark. Fistoulari was no slouch in the recording studio (see for example the whirlwind performance of Rachmaninov's Second Concerto with Julius Katchen) he and the LSO in white hot form laid down in stunning sound, a reference performance.

A Sabre Dance that is too fast? Well we are all entitled to our opinion. Stanley Black came near on the rival Decca label, but none can compare with this combination of polished playing, superb direction and Everest's non pareil clarity and vivid presence.
More Information
Please sign in with your email address or Create an Account.
New Products
Compare Products
Compare
Clear All
You have no items to compare.
My Wish List
Last Added Items
Go to Wish List
You have no items in your wish list.
Vinyl Records Vancouver
Categories
Help
Quick Link
Newsletter