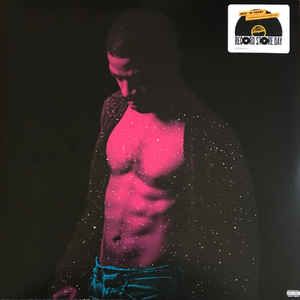 A1 Frequency
A2 Swim In The Light
A3 Releaser
A4 By Design Feat. Andre 3000 Benjamin

B1 All In
B2 Illusions
B3 Rose Garden Feat. Willow Smith
B4 Baptized In Fire Feat. Travis Scott
B5 Flight At First Sight/Advanced Feat. Pharrell Williams

( complex) ""in 2016 Kid Cudi released his sixth studio album, Passion, Pain, & Demon Slayin'. It's coming at a tumultuous time for Cudi's career and, at 19 songs, it's an ambitious piece of music. As such, it's going to take a while for critical consensus around the album. For now, we can only point out the songs that perked up ears on the first listens of the album.

"By Design" f/ Andre Benjamin
When the mercurial Andre 3000 is on a track, you listen to it. Kid Cudi, somehow, got him on two tracks for Passion, Pain, & Demon Slayin'—an impressive feat in 2016. The one to jump to first is "By Design," which features Three Stacks on a dense, arresting hook (that really feels like a repeated verse). The beat is built around an infectious piano loop and a shiny steel drum solo, making it a bright, fun entry from Cudi—something everyone wants to hear. —Brendan Klinkenberg

"Rose Golden"
For fans who are always begging for the old Kid Cudi to come back, they get it and then some on his groovy Willow Smith collaboration. There are the harmonizing hums, a killer hook where Cudi and Willlow beautifully croon together, and an overall good feeling that comes over you while you play it. Cudi gets real on the track, reflecting on past failures while remembering that his mother told him his future is in his own hands. Powerful stuff with the familiar sound from what sounds like a rejuvenated Cudder, which is what all of his fans want to see. —Zach Frydenlund

"Kitchen"
On "Kitchen," Kid Cudi has love on his mind, though based on his lyrics the pursuit may be thwarted by his significant other. Sad. Plain Pat and Dot Da Genius cook up a smooth toe-tapping backdrop that blends with Cudi's airy, passionate vocals. "Can't stand the heat of my love, then stay out the kitchen," he croons. Even with the somber theme, Cudi delivers a convincing performance that will have you in your feels. —Edwin Ortiz

"Does It"
Kid Cudi drives in a lot of different lanes on his sixth album but the track that sees him purely back on his bars talking cash shit in the most melodically engaging way possible? That's "Does It," undoubtedly. Cudder glides over his own beat, getting off some well deserved flexes about his own mythology: "Media acting like I ain't out here—I'm OUT HERE!" My man even carved out a bar to make sure you're spelling his own slang lexicon right. Two t's nigga. —Frazier Tharpe

"Dance 4 Eternity"
Across the album, Cudi is trying new things. While this is classic Cudi—meandering and melodic—it's also got a slinky, retro vibe. It's delicate, and fun, and a little silly. It's the kind of song not many other artists could make; and none would try to. If nothing else, this is Cudi at his most Cudi, and the spacey, groove-filled beat provides him with the perfect environment to be himself. —Brendan Klinkenberg