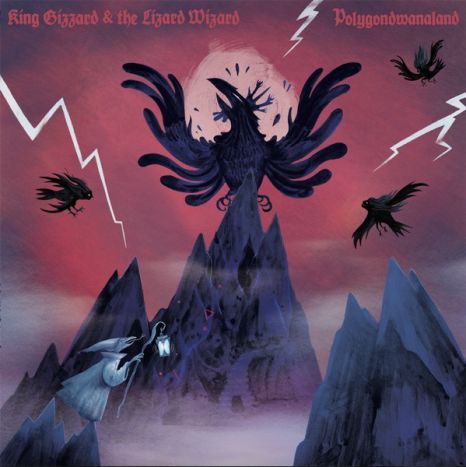 ( stereogum) " For Flying Microtonal Banana, the album they released in February, King Gizzard tuned all their guitars to microtonal intervals, which had the effect of giving all their songs a staring-into-infinity krautrock enormity that meshed fascinatingly with the garage-rock intensity that comes naturally to the band. In June, they followed it with Murder Of The Universe, an album full of short bursts of drooling, freaked-out aggression, like what might have happened if the late-’60s Stooges had tried to play early Pink Floyd-style prog-rock. Sketches Of Brunswick East, from August, was the most laid-back of the records, its jazz-damaged mutant pop shot through with English folk and Ethiopian highlife influences. And if we don’t get that fifth album this year, I can’t imagine anyone will be disappointed, since the new Polygondwanaland is, at least from where I’m sitting, easily the strongest of the four and probably the best album I’ve heard from this band yet.

King Gizzard built Polygondwanaland out of intricate, overlapping grooves. The songs are all in unfamiliar time signatures; they’re math problems that I can’t quite comprehend. (Running errands earlier today, I just about broke my brain attempting to drum along on the steering wheel.) But King Gizzard aren’t jam-band or tech-metal types; the technical dexterity is never the point. Instead, they use all that musicianship to craft an otherworldly rhythmic swirl. It’s all there in “Crumbling Castle,” the album’s towering 11-minute opener. “Crumbling Castle” is a rocker, a staggering psychedelic beast of a song with its eyes locked on the sky. But it’s not a single-minded creature. There’s a lot of room for play in “Crumbling Castle.” At various points in the song, we hear tranced-out flutes, blazing metal riffs, raga-drone organs, and ominous vintage-synth tones that recall Tangerine Dream and John Carpenter film scores. Sometimes, the members of the band attempt to chant like Gregorian monks, which has the slightly hilarious effect of making their accents sound even more Australian than usual.

And if “Crumbling Castle” is the roadmap, it’s a huge one, one that leaves the band plenty of room to wander. There are some genuinely gorgeous acoustic folk songs on Polygodwanaland, but even on those tracks, both of the band’s drummers get serious workouts. (Shout out to two-drummer bands. I’m sure there are shitty two-drummer bands out there, but I’ve never heard them. And the best two-drummer bands — Black Eyes, Kylesa, Thee Oh Sees, Fugazi just before their breakup, the current Bon Iver touring lineup — are just godlike.) Within their warped time signatures and psychedelic repetition, King Gizzard are great songwriters, and the melodies on Polygondwanaland can be soothing or triumphant or, sometimes, both. Lyrically, they’re into dazed galactic imagery, which doesn’t do a lot for me but which does suit the music. The whole sound is defiantly retro in a ’60s or ’70s sense, and there are plenty of obvious touchstones: Floyd, Sabbath, Can, Hawkwind, the 13th Floor Elevators. But like fellow Aussie space cases Tame Impala (a band that otherwise has nothing in common with King Gizzard), they’re great at taking those influences and subsuming them into what they do. When I’m listening to Polygondwanaland, I’m not drawing mental connections to older psych bands or marveling at the fact that these guys already released three completely different albums this year. I’m just letting it wash over me."