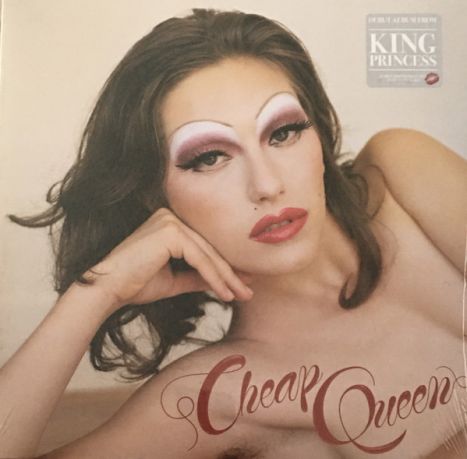 Cheap Queen is the debut studio album by American singer-songwriter King Princess, released on October 25, 2019, through Mark Ronson's imprint of Columbia Records, Zelig Records. Straus began a tour in support of the album on September 20.

The album was written chronologically, with Straus stating that she named the album Cheap Queen after the drag term for a queen that is "resourceful, making something out of not very much". While Straus started her career with songs like "1950" and "Pussy Is God", The Guardian remarked that she swaps out those "queer pop anthems for understated ballads". Straus explained that the album's sound came about as she was "dealing with the most vulnerable year of my life" after the popularity of "1950", as she was under "complete stress and anxiety, and not knowing what to do with myself or with my body, and then also being in love".

"If Straus, who’s better known as King Princess, wanted to compare notes on the ups and downs of a viral breakout, she could do so with a fairly spectacular peer group that includes Maggie Rogers, Billie Eilish, and Clairo.

Straus’ story has an added layer of complexity. Last year, the 20-year-old singer-songwriter rose up on the shoulders of her song “1950,” a sticky, Harry Styles-cosigned debut that took inspiration from classic queer literature and opened with a nod to her sexual orientation: “I hate it when dudes try to chase me.” On its heels came “Talia,” a bit of liquor-wet, post-breakup revelry directed to a conspicuously female subject, and the self-explanatory single “Pussy Is God.” Within months, King Princess was not just a burgeoning pop phenom, but a burgeoning queer idol.

In the historically sanitized landscape of pop music, queer expression is undeniably radical, particularly how Straus does it—by naming and gendering her desire in a way that, not long ago, few dared to. And if Straus is fazed by the burden of representation, she doesn’t show it. Her debut album—that first true test of her artistry—is titled Cheap Queen, borrowing a term from drag culture, and on its cover, she appears with her face done up in drag queen glam, down to the painted-on beauty mark. The title track, she says, is a tribute to her squad, all cheap queens in their own right. (Straus, whose father runs Brooklyn’s Mission Sound studio, inherited a leg up in the industry, so it’s a bit cheeky of her to make a personal brand of scrappiness—but then, cheekiness is part of her brand, too.) Like any good pop song, “Cheap Queen” strikes a balance between specificity and relatability. It shouts out its community without wading into identity politics, instead cultivating, through its inclusive warmth and effortless swagger, a stoner-pop appeal likely to resonate with anyone who’s ever stayed up drinking and smoking with pals.

Thematically, though, “Cheap Queen”—originally one of the album’s sharp, economical interludes, until Straus’ team persuaded her to expand it—stands apart. On the whole, the album is more concerned with lovers than with friends. Sequenced as a chronological narrative, Cheap Queen loosely follows a fraught renegotiation of space between exes; the particulars aren’t quite so interesting as the emotions they draw out. Straus has noted her eagerness to “write about getting my heart smashed,” and she repeatedly delivers on the drama of that declaration. “Homegirl,” a schmaltzy, vibraphone-embellished ballad, tracks the triangulation of glances between Straus and the boys who are eyeing the same woman at a party—the kind of gathering where close quarters reveal vast emotional distance. The gulf between Straus and her love interest widens as she considers forgotten possessions unlikely to be reclaimed (“Isabel’s Moment”) and nervously awaits a text unlikely to arrive (“Watching My Phone”).

The latter song’s clincher is an admission of inadequacy: “I can’t be the million girls you’re going to meet.” The meekness is gutting; its narrator is barely recognizable as the same person who earlier claimed to be “getting too cocky, since everyone wants me,” who wrote off her ex with a sweetly condescending, “You’re probably just a fan now, babe.” But embracing opposing energies is the King Princess way. She is confident and vulnerable, cool and earnest. As her chosen moniker suggests, she’s masculine and feminine, swaggering and soft, posing for Playboy as both cheerleader and jock. She’s posing for Playboy, a bastion of the male gaze that her widely broadcasted sexuality belies.

In particular, Cheap Queen plays on a tension between old and new. Straus and her Gen-Z peers grew up listening to Drake, Beyoncé, and Taylor Swift, but Straus’ industry-adjacent upbringing also exposed her to ’70s rock bands including Led Zeppelin and T. Rex. Like Styles, who helped precipitate her fame, she seems eager to cut her modern pop sensibility with doses of historicism. On Cheap Queen, the drum pads and Auto-Tune harmonics that defined her first singles are still part of the mix, but the computer isn’t her primary tool. There’s a hint of Janis Joplin when Straus layers in blues guitar and organ or teases the occasional snarl out of her otherwise silky voice. Latter-day rock prophet Father John Misty drops by to handle drums on “Ain’t Together,” a crisp, handsome tune with Beatles-esque eccentricity in its (digitally approximated) Mellotron fills and densely layered backing vocals." ( pitchfork)