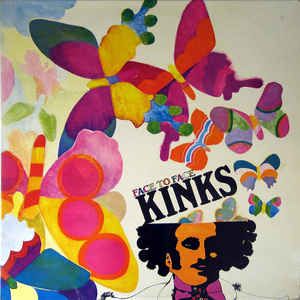 
A1 Party Line
Written By  R. & D. Davies
A2 Rosy Won't You Please Come Home
A3 Dandy
A4 Too Much On My Mind
A5 Session Man
A6 Rainy Day In June
A7 House In The Country

Like Another Side of Bob Dylan and the Beatles' Rubber Soul, Face to Face marks the beginning of the Kinks' classic period. From here on, Kinks records would become more than collections of songs, they'd become coherent frames whose material added up to a complete perspective. This record arguably presents the birth of the "concept album." And in the subcategory of records vying for first concept album (pre-Tommy, of course), such as S.F. Sorrow by the Pretty Things, Face to Face is easily the most rewarding.

All of Ray Davies's themes are represented: materialism among the English upper class ("House in the Country," "Most Exclusive Residence for Sale"), depression ("Too Much on My Mind"), and nostalgia ("I'll Remember"). But these themes always lead Davies to penetrating, timeless songs of resignation, and so it is here ("Sunny Afternoon"). This is mandatory listening for any fan of popular music from the '60s


With "Face To Face" The Kinks albums fully lived up to the fantastic level of their singles even thou "Kink Kontroversy" was close. From then on the question was rather if the singles gonna liv up to the standards(which they did most of the time)of the albums. This was the start of a magnificence albumera for The Kinks. From 1965:s "Kink Kontroversey" to 1971:s "Musswell Hillbillies" they released eight LP:s in a row that all was indispensable (here I dont count the uneven soundtrack "Percy", it was a soundtrack after all). I wonder if not "Face To Face" is the best of the whole lot with 14 songs all deserving an a-side on a single that would have made any jukebox bubble with euphoria. And it all starts with a telephonecall:

"Party Line" - One of the few songs the Daviesbrothers wrote together. Here Dave excels with great singing and ballsy, kinky guitar in happily uptempo pop that really makes you feel invited to this party. One of the strongest albumstarter ever.

"Rosy Wont You Please Come Home" - A delicius popsong and the second (the first was "See My Friends") about the loss of Ray and Daves bigsister. The feeling of grief intensifies with the electric guitar played in unison with Rays voice in the blusy refrain. Nice embellished with Nicky Hopkins harpischord.

"Dandy" - A singalong-hit in any pub, Im sure. Passionate singing from Ray and a strong melody that not even The Herman Hermits could spoil.

"Too Much On My Mind" - A beautiful ballad that starts carefully with just acustic guitar, bas and Rays voice and then builds up with more and more instruments and voices. When the drum finaly comes in we are transcended to popmecca. Then the song gets peeled again and ends with the sole bas. Quite a trip in two and a half minutes.

"Session Man" - Starts with busy harpischord from Nicky Hopkins which is suitable since the song is about him. A man for hire. Pure pop for now (and then) people.

"Rainy Day In June" - Thunder and rain. A spooky tune with a note of melanchony. Rays desperate singing adds to the atmosphere.

"House In The Country" - Is this about the same guy who was dissected in "Well Respected Man"? A song about yuppieness 15 years before the word existed. A great rocker in the vein of Chuck Berry. And thematicly a big influence for their pupils Blur in their classic "Country House" almost 30 years later.

"Holiday In Waikki" - An other song carrying the torch from The Mighty Chuck. A greeting from Honolulu with a lots of musical pranks from Mick Averys flirt with Gene Krupa and the Bobcats to Dave Davies imitating slack key guitar/hawaiian steelguitar and his ingenious loan from Spike Jones "Hawaiian War Chant".

"Most Exclusive Resident For Sale" - About a mans decay not too different from the story in "Alcohol" a couple of years later. More great pop.

"Fancy" - The vibes of "See My Friends" reappear again but this time musically with the Indish dronesound. Hypnotic beautiful.

"Little Miss Queen Of Darkness" - Something like a blend of a blusy George Formby and dixieland. A kinky mix of England and America. Cool midpart when the rest of the band lay low and Mick Averys drums takes the lead.

"Youre Looking Fine" - A delicate blues, fronted by Dave, which is economic arranged with effective guitar- and pianofills over the ongoing guitar/bas-theme.

"Sunny Afternoon" - The classic summer hit simular in style to "Little Miss Queen Of Darkness". Always a singalong-highlight at conserts demonstated most moving on "Live At Kelvin Hall" in the year to come.

"Ill Remember" - The album ends with a poppearl colored with petrol drums.

The Kinks - Too Much On My Mind