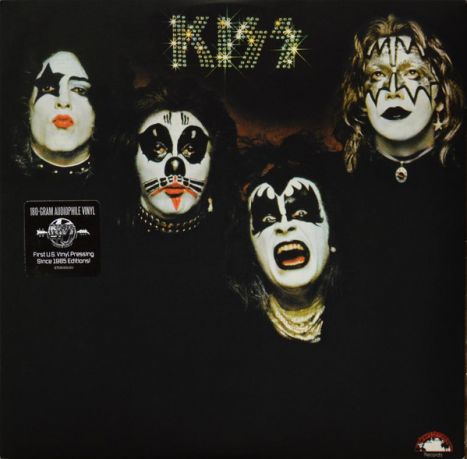 
The great thing about this album is the absolute rawness and honesty of the production and composition. Ironically, there's a sort of innocence to the sound of this album. This was way before garage bands were walking into top-level studios and churning out critically-acclaimed (and quickly forgotten) "masterpieces". This album is a different kind of masterpiece.

The songs aren't on the level of the Beatles or Led Zeppelin, but there are some catchy hooks here and there. Ace Frehley is no Eric Clapton, Gene Simmons is certainly no Paul McCartney and Paul Stanley is no John Lennon. But the guitar playing is competent and the singing fits. Peter Criss is pretty impressive on this album, combining his big band jazz chops with the straight forward beat necessary for a hard rock album.


Simmons has some great "walking" bass lines and Frehley's guitar solos are actually quite tasteful. So for material that is so utterly "adequate", how can I give it four stars and call it a masterpiece? A couple of reasons. For starters, the material still holds up, which, thirty years later, is quite a feat. Frehley's "Cold Gin", sung by Simmons, is a great rock song. The straight-ahead rock and roll tune "Nothin' to Lose", sung by Simmons and Criss, brings to mind what might have happened if the Beatles and Cream had jammed together (with Little Richard on piano).


"Deuce", another Simmons song with bizarre lyrics about what appears to be a strained relationship, comes off with a frustrated energy that almost dares you not to dig it. Paul Stanley's "100,000 Years" is both aggressive and PROgressive at the same time, allowing Peter Criss ample opportunity to work a 6/8 beat, which is his specialty as a roots R&B and jazz drummer. "Let Me Know", a song sung by Simmons and Stanley is just plain fun.


And the cinematic "Black Diamond", which closes the album, is as majestic as a metal tune in 1973 could be.

Another reason for my lingering fondness of this album is the naked production value. You can hear every instrument perfectly. There's none of the slick studio wizardry we're used to nowadays - just a touch of reverb here and there for flavor. It's one of the few rock albums that truly sounds like four guys in a room playing music.

1975 promo
the cinematic "Black Diamond", which closes the album, is as majestic as a metal tune in 1973 could be.


Man they were always so RAW and LOUD back in the day, I always loved this song played live