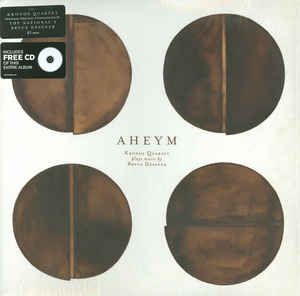 
B Little Blue Something

Performing four compositions by Dessner,The Kronos Quartet champion an exciting young composer, continuing a history of presenting new and important works and composers that stretches back to their founding in 1973.

Dessner has a history of composition that predates his membership in the National, and represents a new generation who are blurring the lines between rock and contemporary classical music. From the raw emotional overtones of Aheym to the soaring choral crescendo - courtesy of the Brooklyn Youth Chorus Of Tour Eiffel, Bryce Dessner s Music for the Kronos Quartet will delight longtime followers of Kronos work with Steve Reich, Philip Glass and others, and will challenge and surprise the National s many fans.

Last night I heard the work Aheym performed by Dessner and the Kronos Quartet, and their energy and interplay on this album is duplicated but with the addition, through audio engineering, of close-in detail, which makes the piece even more beautiful and interesting. The subtitle is Homeward; composed with the idea of his grandmother's immigration to the United States, its development evokes rapid flight from danger.

While Dessner is an avant-garde classical composer, he is known mainly for being a rock guitarist and improviser. Little riffs of his guitar can with a new perspective evolve into such repeating and embellished phrases as Little Blue Something, which was influenced by Early Music and European folk tunes.


Its abstraction and mantra-like flowing, like the earlier work, keep an even line and singular emotion. Tenebre, the longest track, opens quietly and nervously with rapid bowing but the cello emerges with a slow, thoughtful tune. Tenebre means shadows and darkness, and the work concerns Holy Week, the specific rite when 15 candles are one-by-one extinguished. Dessner instead increases the light by counterpoint and fugue.


The simple quiet piece grows more complex and an overlay of Sufjan Stevens' vocals closes the work, emphasizing its liturgical quality. It is an astonishing composition. The last piece is a choral work commissioned by the Brooklyn Youth Chorus. Tour Eiffel is based on a poem by Chilean poet Vicente Huidobro that refers to the newly constructed Eiffel Tower and generally concerns fathers and sons. Guitar and piano are part of the ensemble. Together, these works make the album an outstanding addition to the Kronos Quartet discography and brings Dessner to the forefront. The Kronos is now 40 years old, an institution. Aheym is a glowing candle for their cake.