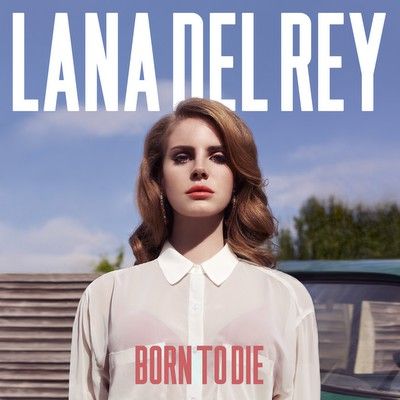 A2 Off To The Races

B12 This Is What Makes Us Girls

Includes lyric sheet with photo on other side.

All that matters to me is the music - and the music is sublime.

A big part of the appeal is that incredible, shiver-inducing voice; one moment it's a world-weary drawl encompassing all the despair of broken dreams and unfulfilled hopes... the next it's girly and playful with an uncomfortable undercurrent of knowing sexuality (hence the 'Lolita' comparisons). It's perfectly matched by the 'Lynchian' quality of the music, a combination of dreamy, seductive Hollywood strings and grimy trailer-park beats. It's Nancy Sinatra lost in the world of Twin Peaks.

Lana Del Rey went viral seemingly overnight last summer with her "Video Games" video clip, subsequently followed by the "Blue Jeans" clip, and from pretty much out of nowhere in a matter of 6 months, she played at Saturday Night Live recently.

"Born To Die" (12 tracks; 50 min.) can be divided in 3 sections. The first 4 tracks are slow-burners, pretty much in the vein of "Video Games" but check out in particular "Off To the Races", an album highlight.


The middle section of the album (tracks 5 though 8) brings slightly faster tracks, and shines thoughout. "Diet Mountain Dew" is delightful, with playful lyrics like "Diet Mountain Dew baby New York City/Can we hit it low now down and gritty".


Likewise with "National Anthem" (not to be confused with Radiohead's "The National Anthem"). After a brooding "Dark Paradise" (see my review title), comes "Radio", by far the most readily accessible track on this album (chorus: "Now my life is a sweet cinnamon/like a f**king dream I'm living in"). T


he last third album slows back down, and contains several other highlights such as "Million Dollar Man" (which reminds me of early Fiona Apple, think Never Is a Promise/The Child Is Gone/Pale September). The album ends appropriately with the self -explaining "This Is What Makes Us Girls".

In all, this is quite the album. Mostly dark, brooding, biting, yet funny and playful at times. Definitely not for anyone in a hurry. This album proves that Lana is the real deal, period, forget all the hype and everything else.