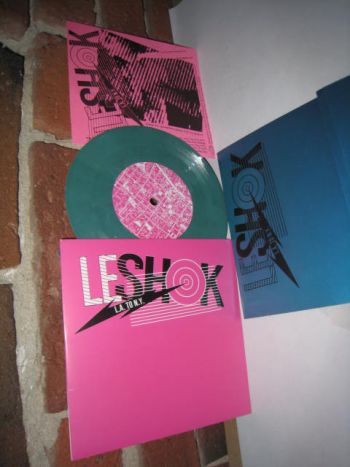 Skip to the beginning of the images gallery
Details
Le Shok - L.A. To N.Y.

B1 Do The Dramatic (Live)

B2 Give Me Something, Help Me Please (Live)


Never mind the breakup: after selling, like, 1,500 copies of this, their newest release, in just 15 minutes, it's pretty evident that Le Shok are wanted as much or more dead than they ever were alive. This single is proof that like spirit guides the Germs and the Fall, Le Shok could be sharp as a razor onstageif they wanted to be. The Le Shok treatment of the Screamers' "122 Hours of Fear" (cornered and captured on KXLU last year) really digs out the topnotch songwriting of Tomata Du Plenty and company, amplifying the jittery anxiety that was the '77 LA synth punk band's stock-in-trade into a tightly focused slash from the past.
More Information
Please sign in with your email address or Create an Account.
New Products
Compare Products
Compare
Clear All
You have no items to compare.
My Wish List
Last Added Items
Go to Wish List
You have no items in your wish list.
Vinyl Records Vancouver
Categories
Help
Quick Link
Newsletter