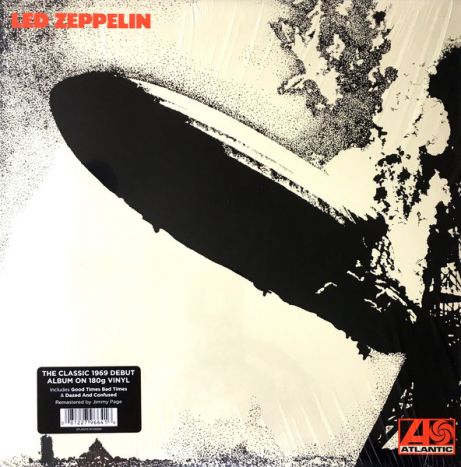 Remastered and Cut from the original master tapes at Metropolis Mastering, London, UK

5. Your Time Is Gonna Come
6. Black Mountain Side
7. Communication Breakdown
8. I Can't Quit You Baby
9. How Many More Times

Shortly after their first tour, the group's self titled first album, Led Zeppelin was released on January 12, 1969. Its blend of blues, folk, and eastern influences with distorted amplification made it one of the pivotal records in the creation of heavy metal. Ironically, Robert Plant has commented that it is unfair for people to think of the band as heavy metal, since about a third of their music was acoustic. In an interview Jimmy Page said that the album took about 36 hours of studio time to create, and stated that he knows this because of the amount charged on the studio bill.
In Stephen Davis' biography of the band, Hammer of the Gods, it is stated that Peter Grant claimed the album cost £1,750 to produce (including artwork).
By 1975 the album had grossed $7,000,000.

Although several of Led Zeppelin's earliest songs were based on blues standards, others such as "Good Times Bad Times" and "Communication Breakdown" had a unique and distinctively heavy sound. Led Zeppelin also featured delicate steel-string acoustic guitar on "Black Mountain Side", and a combination of acoustic and electric approaches on the reworked folk song "Babe I'm Gonna Leave You." "Dazed and Confused" had a solo using a violin or cello bow on the guitar (suggested by the father of actor David McCallum, whom Page met in studio session work), and was played at many Led Zeppelin concerts. "How Many More Times" also involved Page playing an electric guitar using a bow. The song includes a section with Plant singing Albert King's "The Hunter", an older blues song. The album features Plant vocally mimicking Page's guitar effects--a metallicised version of the 'call and response' blues technique.

A still of the flaming Hindenburg, famously adapted by Led Zeppelin for their first album coverOther songs included "I Can't Quit You Baby", originally written by bluesman Willie Dixon, and "You Shook Me", by Dixon and J. B. Lenoir. Jeff Beck had previously recorded "You Shook Me" for his album, Truth, and accused Led Zeppelin of stealing his idea. This led to a long rift between Beck and Page, who had been friends for years.

While the album received generally positive reviews, some derided it, most famously John Mendelsohn of Rolling Stone magazine, who savaged the band for stealing music (notably Black Mountain Side from Black Water Side by Bert Jansch and the riff from Your Time Is Gonna Come from Traffic's Dear Mr. Fantasy), mimicking black artists, and showing off. This marked the beginning of a long rift between the band and the magazine, with Led Zeppelin rejecting later requests for interviews and cover stories as their level of success escalated.

Led Zeppelin's album cover met an interesting protest when, at a February 28, 1970 gig in Copenhagen, the band was billed as "The Nobs" as the result of a threat of legal action from aristocrat Eva von Zeppelin (relative of the namesake creator of the Zeppelin aircraft), who, upon seeing the logo of the Hindenburg crashing in flames, threatened to have the show pulled off the air.