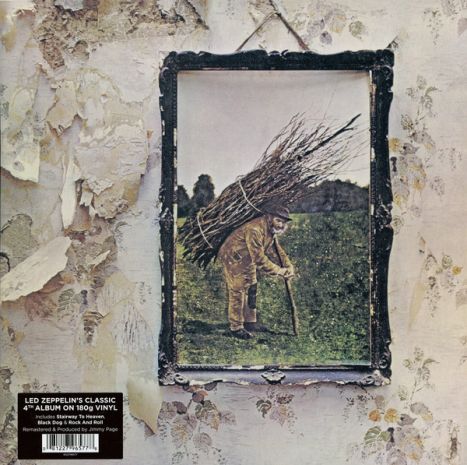 Release doesn't feature an explicit title, as with the original issues.

Made in the EU (inside the sleeve)

1. Black Dog
2. Rock and Roll
3. The Battle of Evermore
4. Stairway To Heaven

Zep 4, Also commonly known as Zofo or Stairway to Heaven, this album was mysteriously released without any information about the band or its songs on the cover. The concept behind this daring statement was that the music inside would speak for itself, and it did just that in spectacular fashion. Regarded by most people as Led Zeppelin's masterpiece, this album represents the band's peak, as it's simply one of the most perfectly realized albums of all time.

It begins with two superb rockers: "Black Dog," which is best known for Plant's a capella vocals, and "Rock 'n Roll," a high octane '50s styled rocker that features an unstoppable beat, yet another great Page guitar solo, and Bonham's famous drum solo at its finish.

And what can be said about their ultimate masterpiece, "Stairway To Heaven," that hasn't already been said? Simply put, there's a reason that this song has often been cited as the greatest rock song of all time. Starting with a beautiful, almost classical beginning (that's clearly inspired by Spirit's "Taurus"), the song builds and builds until it reaches its crashing crescendo and ultimate denouement.

Continuing, the strong "Misty Mountain Hop" and "Four Sticks" ( are both upbeat rockers before "Going To California" follows with another beautifully understated acoustic folk song.

Finishing with a flourish, "When The Levee Breaks" is a magnificent blues epic (one of the band's very best) that's most notable for Bonham's unbelievable "hammer of the gods" drumming - when he unleashes his titanic drum fill (you know the one) it gives me the chills every single time. The greatest album by arguably rock's greatest band, this album is a cornerstone of any serious rock collection.