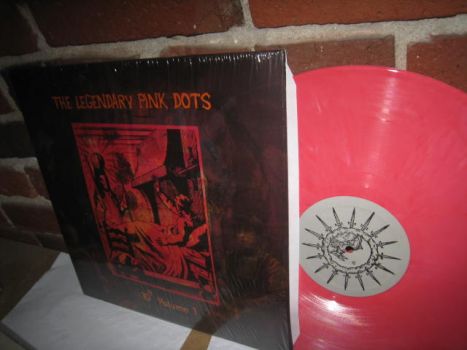 
Legendary Pink Dots are back with a new great concept album.

This is first Volume of a complex story about conspiracy, magic, and spirituality. Minimal synths, guitars, syncopated rhythms that are making weird, psychedelic and transcendental noises which are of course accompanied by the distinctive voice of Ka-Spel. Lying on your sofa, pumping up the volume and just dream away on their ethereal sounds.
10 to the Power of 9 is a dark and exceptional trip into their warped and bizarre musical psyche.

Edward Ka-spel speaks on the nature of the concept album: There are 10 people who run the world. They are all male and presidents, magnates, and high priests all do their bidding. The 10 live in villas in the remotest part of the Himalayas  a place that absolutely NO ONE would ever stumble upon. Although the 10 live in such close proximity to each other, they choose to have meetings in the back room of a small office in London. Thats where the decisions are made. Thats where the wars begin, thats where the dice are tossed across the table to establish who wins, who loses, who lives, who dies. 10 to the Power of 9 is the first volume in a series discussing conspiracy, magic, and spirituality. The classic conspiracy theory to end them all and I listened, open-mouthed, hair falling into my eyes, Ka-spel continues. It was maybe 1976 when I heard this first. You are right to snigger at my naivety. I listened and twisted this story around inside my head, and it did indeed seem completely unbelievable. Now of course its 2014, and Im older and wiser and I have to laugh at myself too. Now I know wasnt a theory. Now I know its true.

For sure one of the best Concept album of the Band.