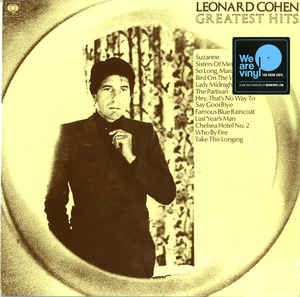 The Best of Leonard Cohen samples 12 of the many highlights from the singer's first four studio LPs. With a heavy emphasis on the debut Songs of Leonard Cohen and its follow-up Songs From a Room, the set includes such masterpieces as "Suzanne," "So Long, Marianne" and "Bird on the Wire," as well as later efforts including "Chelsea Hotel" and "Famous Blue Raincoat."

Leonard Norman Cohen, CC (born September 21, 1934 in Montreal, Quebec) is a Canadian poet, novelist, and singer-songwriter. Cohen published his first book of poetry in Montreal in 1956 and his first novel in 1963.

Cohen's early songs are based in folk music melodies and instrumentation. In the 1970s, he was more influenced by popular music and cabaret music. Since the 1980s he typically has sung in a baritone register, with accompaniments from electronic synthesizers and female backing vocals.

Cohen's songs are often emotionally heavy and lyrically complex, owing more to the metaphoric word play of poetry than to the conventions of song craft. His work often explores the themes of religion, isolation, sexuality, and complex interpersonal relationships.

Cohen's songs and poetry has influenced many other singer-songwriters, and more than a thousand renditions of his work have been recorded. He has been inducted into the Canadian Music Hall of Fame and the Canadian Songwriters Hall of Fame and he is a Companion of the Order of Canada, the nation's highest civilian honour.