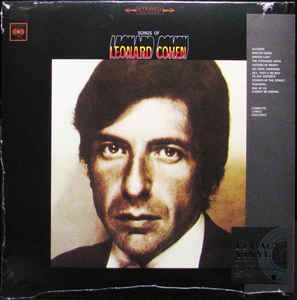 B1 So Long, Marianne
B2 Hey, That's No Way To Say Goodbye
B3 Stories Of The Street
B4 Teachers
B5 One Of Us Cannot Be Wrong

I remember first hearing his gravelly voice wafting out of a friend's dorm room late one wintery night, and invited myself in to listen to Cohen's music the last semester before I graduated, and was blown away by the way this guy sang and by what he had to say. Needless to say, I've been listening ever since, for this is a quite unique album, a first effort by Leonard Cohen, the Canadian who is a poet and novelist turned songwriter and folk singer.
He known as the "poet of existential despair", a man of soaring visages and terrible nightmares, all put to beautiful and classic melodies. This album is the stuff of legends, with "Suzanne", "Hey, that's No Way To Say Goodbye", "So Long, Marianne", "The Master Song", "The Stranger Song", "Sisters of Mercy", and a number of others. His voice is painful, hypnotic and gravelly, literally oozing with the kind of deep desperation his evocative lyrics blend perfectly with. The guitar work is clear, and immaculately appropriate, and the rest of the arrangements are spare and fit the folk song style he employs.

Others like Judy Collins made hits out of a number of these songs, especially "Suzanne", but no one sings them with the same kind of heartstruck originality Cohen delivers. ( RIP)

, newly emerged from a few years in a Zen monastery as the master of all he touches, and is considered a kind of elder statesman of folk-rock. Quite a mysterious and interesting soul, as they say. Almost everyone has recorded some of his stuff, and there is a tribute album that is a best seller. But this is where the rubber first hit the road, and after you've listened to this a few times, preferably late at night with a bottle of good wine half down your gullets, you'll understand why there's been over thirty years of excitement fuss about Leonard Cohen

From the Canadian movie "I Am A Hotel" (1983).
The whole video is only 24 min. long but it contains some of the best LC's songs.
Written by Leonard Cohen and Mark Shekter, produced by Allan Nichols for Blue Memorial Video Ltd. Filmed at the King Edward Hotel, Toronto.
The video won the Golden Rose international television award in Montreux, Switzerland.