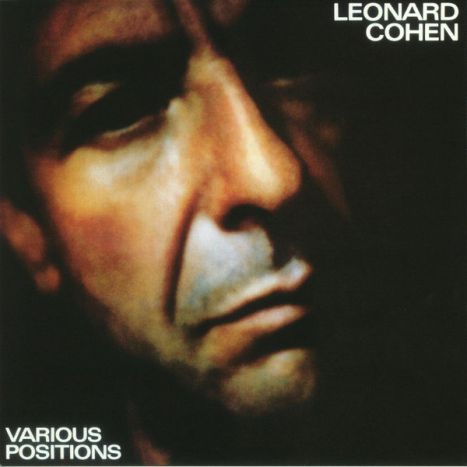 This 1984 album, the last of Cohen's folk masterpieces and one subtly spiced with country, never grows stale due to the intricacy of its arrangements - vocal & instrumental - while perennially revealing deeper layers of metaphysical & symbolic significance. Or as one ages one understands better! Particularly sublime is the interaction of male & female vocals calibrated to bring out the best in both. The devotion and the vocals of Anjani Thomas and Jennifer Warnes make a major contribution to the music's enduring beauty.

Cohen's gift of melody & rhythm finds buoyant expression in Dance Me to the End Of Love which may sound catchy and even frisky like a simple pop tune but if one pays attention multiple meanings & possibilities emerge. In contrast, Coming Back to You unfolds slowly and solemnly through a graceful melody wed to imagery that navigates delicately between romantic & divine love. The two tracks The Law and The Night Comes On evoke something of John Berryman's poetic sensibility ... The Moon and the Night and the Men, The Song of the Tortured Girl and above all, Sonnet number 34.

The Night Comes On may be the absolute highlight of this album, a rare gem ranking amongst the greatest of Cohen's songs. Like assembling a pearl necklace, it strings striking images of the domestic & personal, the universal, the spiritual, historical and prophetic on a thread of longing. As the song unfolds, the symbolism unleashes an almost supernatural power that stirs the psyche hinting at or conjuring vague specters of ancient memories. There are close correspondences in the song Anthem on The Future.

Being familiar with John Cale's soaring version of Hallelujah on the tribute album I'm Your Fan and Jeff Buckley's on Grace, Cohen's own sounds somewhat monotone and subdued, still beautiful but constrained within a narrow range compared to the aforementioned. The tale of David & Batsheba that started with desire, led to murder & a string of tragedies but was ultimately transformed into the redemptive, relies in the songwriter's version on the atmosphere created by the female vocals rather than his voice.

The words of the rhythmic lilting song The Captain with its tinkling piano, tangy country flavor & ironic comment on "some country-western song" contain & conceal more than they reveal as they undulate on the tune & the beat. Then the tempo drops for the cold & alienating Hunter's Lullaby that in arrangement (not mood) resembles the 1979 album Recent Songs. The message is baffling but may refer to the subconscious impulses that isolate & lead us astray. There is a sense of menace & desolation without the redemptive introspection of The Beast In Me by Nick Lowe on his album The Impossible Bird.

Cohen's mysticism, masked or open, infuses every song. It manifests most painfully in Hunter's Lullaby & most inspiringly in The Law, The Night Comes On & The Captain while in Heart With No Companion it shines like a thousand suns. The healing power can go everywhere and reach anyone, only & exactly because it has been shattered. It recalls the crack in everything that allows the light in on the aforementioned Anthem, a reference to the shattering of the vessels as explained in the Arizal's The Tree of Life: Introduction to the Kabbalah of Isaac Luria as preserved by Rabbi Vital, and less clearly in the Zohar.

The impassioned Heart With No Companion combines a lilting uptempo beat & hypnotic tune with lyrics contemplating disillusionment, shattered dreams & immobilizing fear exacerbated by a terrifying prophecy: "Through the days of shame that are coming/through the nights of wild distress". These negatives are all erased, however, by the lines: "Now I greet you from the other side/Of sorrow and despair/With a love so vast and shattered/It will reach you everywhere". The defiance expressed by: "Though your promise count for nothing/You must keep it none the less" is in fact the antidote to nihilism, affirming the primacy of spirit and of the word. Land Of Plenty on Ten New Songs covers some of the same territory: "For the Christ who has not risen/From the caverns of the heart/For what's left of our religion/I lift my voice and pray/May the lights in the land of plenty/Shine on the truth some day".

If Hunter's Lullaby seemingly submits to despair whilst Heart With No Companion directly defies it, the final song is a prayer of intercession on an ancient pattern, the same to which The Lord's Prayer conforms. With praise and reverence, If It Be Your Will intercedes not only for the tormented souls in hell but for all the children in their "rags of light," the remnants of the shattered vessels. As a sung prayer it is as moving as Calling My Children Home performed by Emmylou Harris on Spyboy although it is serene where Emmylou's song yearns with burning heartache. The one represents Rachel weeping for her children whilst the other calms the tempest with trust in the Eternal Divine, knowing that Spirit in mercy overrules The Law (of cause & effect).