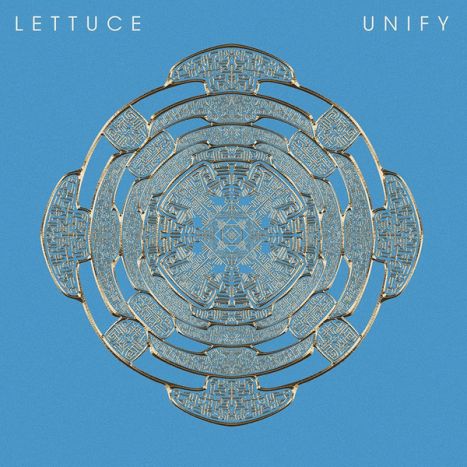 "It’s ultra-rare that a group continues to fearlessly level up its artistic ambitions this deep into the game. Most established acts tend to lean safe and sound, resting on their laurels, if not their cred or clout. Lettuce continue to buck convention, refusing to be pigeonholed nor quantified while delivering what their dedicated fans have come to expect: Grade-A Lettucefunk. Unify reveals a Lettuce adept at pushing their own envelope on a never-ending search for new land, while maintaining their stylistic and energetic DNA to the core.

Tracked once again at Colorado Sound Studios, Unify was self-produced by Lettuce. The band took what they’ve previously learned under the expert tutelage of Russ Elevado and Joel Hamilton and applied it to their own collective sonic vision. The result is an album that feels as vital as it sounds, a warm, dynamic record that pulses, breathes, bobs, weaves, gasps, and exhales much like a living organism. The high-fidelity color and earthy textures reverberate as vibrantly as ever, somehow raising the bar from the excellent production on 2019’s Elevate and 2020’s Resonate.
The current iteration of Lettuce has been locked and levitating for the past five-plus years. The core four of Adam Deitch (drums, percussion), Adam “Shmeeans” Smirnoff (guitar), Erick “Jesus” Coomes (bass), Ryan Zoidis (saxophones) has been down by law since the Comm Ave jam sessions in the ’90s. In the ensuing decades, each member steadily stepping into their own as composers and producers. Eric “Benny” Bloom (trumpet) and Nigel Hall (keyboards, vocals) have long been familial and official, and their voluminous contributions on Unify are essential to the Voltronic elixir.
“RVA Dance” kicks things off with the Lettuce you know and love. The opening salvo is reminiscent of the original funk blueprint that first made their bones around the turn of the millennium, albeit conceptually and sonically updated for the now. First single “Gravy Train” is another jam boasting classic LETT genetics juxtaposed with a contemporary verve, feel-good fatback funk that lives inside its syncopated groove.
“The Lock” is a rhythmic wonder cut from the same cloth: chicken-scratch, mean-mug, stank-face funk, freshly dipped in a fly whip, stutter-stepping through the hood. Jeffrey Lockhart, their mentor, sensei, and OG from the Wally’s days, slides through with his patented angular southpaw guitar for a song that bears his name in reverent homage.
When it comes to special guest bassist and funk pioneer William “Boosty” Collins, there is none higher. Bootzilla stomps through the proceedings on the elastic-thump of “Keep That Funk Alive”. As Deitch and Boosty told NPR earlier this week, the cut was seeded via Adam’s stealth sample, a clip he lifted from the Rubber Band Man’s hopeful Instagram missive that he delivered during the early stages of the pandemic. Over the course of a calendar year, the track evolved into the most crucial—and possibly impactful—collaboration of the band’s career, with an assist from longtime fam, gospel/blues vocalist Laneesha Randolph.
A nod to the days of trunk-rattlin’ systems setting off car alarms, the crunkalogic “Waffles” will make it clap. This hydraulic neck-snapper leaps out of the subwoofers and into your chest with a visceral physicality. Deitch and Coomes mine Fyre Dept. elements, Benny and Zoidis respond/react with authoritative brass blasts. On “Waffles”, Lettuce turn style, transforming the nuclear code into a syrupy, dubbed-out Dilla-fied groove, hot-drippin’ candle wax and smooth like butta.

Unify is sprinkled with a trifecta of interludes, or “‘Ludes”, a snippet series containing short, potent blasts of smoked-out sample source material. LETT improvise dusty fractal fragments. The purpose of the “’Ludes” is palette cleansing, setting the table for the track that follows, making the compositions connect in subtle symbiosis." ( live for music)