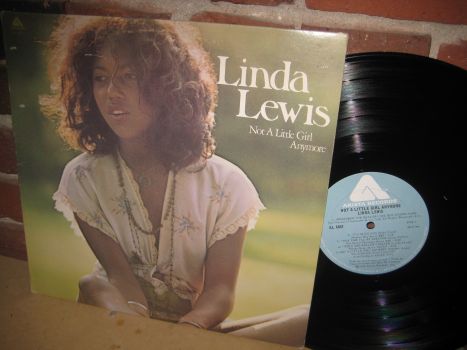 
"IT'S IN HIS KISS" A DISCO REMAKE OF THE SHOOP SHOOP SONG BY BETTYE EVERETT.

Her highest UK chart position came in 1975 with a cover of the Betty Everett hit, 'It's In His Kiss (Shoop Shoop Song)' reaching number 6. The accompanying album, "Not A Little Girl Anymore", reached the Top 40.

Lewis is the oldest of six children. From an early age, Lewis showed promise in acting and singing; so much so that her mother decided to send her to a local stage school when she was only three years old. Over the next few years, Lewis was regularly cast in non-speaking TV and film roles: appearing in the 1961 film, A Taste of Honey, and in the role of a screaming fan in the first Beatles' movie (1964) A Hard Day's Night.

Acting, however, was never her first ambition. Possessing a five-octave vocal range, Lewis built her reputation as a singer instead, joining the British group Ferris Wheel in 1967. When the group disbanded in 1970, she went on to pursue a solo career.

A self-taught guitarist and keyboard player, Lewis was heavily influenced by Stevie Wonder and also drew inspiration from Joni Mitchell among others. With her blend of soul; folk, pop and reggae, she helped paved the way for today's artists like Des'ree and India.Arie.

In 1971, Lewis signed a solo deal with Warner Bros. Records/Reprise Records, having been introduced to the record label by her then boyfriend (and now label-mate) Jim Cregan, who went on to become her husband. She also launched a career as a session vocalist. Over the next few years, her powerful and amazing range could be heard on hit albums by Al Kooper and David Bowie (she appears on his 1973 Aladdin Sane LP), among others.

In 1973, she released Fathoms Deep, an album that established her as one of Britain's most promising young female singer/songwriters. The album was critically acclaimed but did not sell well.[1] However her first hit single, 'Rock-aDoodle-Doo', reached number 15 in the British charts in the summer of 1973.

Lewis went on to release another album, but her big break did not come until the triumphant Not A Little Girl Anymore LP in 1975, featuring contributions from Allen Toussaint and the Tower of Power horn section, among others.
More Information
Please sign in with your email address or Create an Account.
New Products
Compare Products
Compare
Clear All
You have no items to compare.
My Wish List
Last Added Items
Go to Wish List
You have no items in your wish list.
Vinyl Records Vancouver
Categories
Help
Quick Link
Newsletter