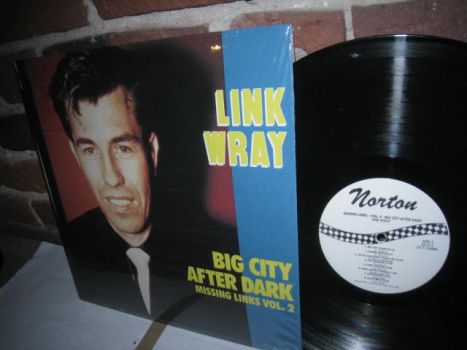 
Link Wray may never get into the Rock & Roll Hall of Fame, but his contribution to the language of rockin' guitar would still be a major one.
Quite simply, Link Wray invented the power chord, the major modus operandi of modern rock guitarists. Listen to any of the tracks he recorded between that landmark instrumental in 1958

With his rawboned and ravaged instrumentals from the early '60s, Link Wray single-handedly made the guitar the ultimately cool instrument of choice for a whole new generation. Wielding a Danelectro Longhorn, Link Wray -- who created the blueprint for everyone from the Kingsmen to the Cramps with his flame-throwing sound -- proceeded to outdo himself with this rare LP from 1963, now corralled on this exact-repro, Sundazed edition, in crunchily perfect sound courtesy of the original Swan mono master tapes!

The second volume of Norton Records' four-volume MISSING LINKS set, 1996's BIG CITY AFTER DARK is a two-pronged affair. Twelve of the 22 previously unreleased tracks are unissued studio recordings from the early '60s, and a pretty mixed bag in terms of both style and sound quality. During this era of Wray's career, the guitarist was floundering a bit for a public persona. Surf guitar was the big thing in instrumental rock during this period, but Wray wasn't a surf guitarist.

Wray's unique style blended the sort of distortion and controlled feedback pioneered by the Chicago blues guitarists and applied it to twangier, somewhat rockabilly-influenced compositions like his big hit "Rumble," creating a new and surprisingly influential blend. The studio recordings find Wray both revisiting past glories, like the self-explanatory "Rawhide '64," and exploring new directions. More impressively, the other 10 tracks on this set are a complete 1961 concert that finds Wray and his Wraymen in full-on rave-up mode. These tracks are sweaty, noisy guitar-god fun, vitally important for all Wray fans.