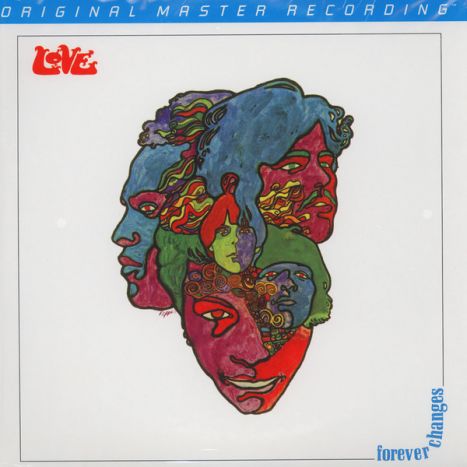 C1 Maybe The People Would Be The Times Or Between Clark And Hilldale 3:34
C2 Live And Let Live 5:26
C3 The Good Humor Man He Sees Everything Like This 3:08

While finding only modest success on the music charts, Love would come to be praised by critics as one of the finest and most important American rock groups of their era. Their third album 'Forever Changes' (1967) is generally regarded as their masterpiece.

More recently the album has received recognition as one of the greatest rock albums of all time, appearing on Rolling Stone magazine's list of The 500 Greatest Albums of All Time, being inducted into the Grammy Hall of Fame and being added to the National Recording Registry.

One of the most unusual of all psychedelic albums is still rated by many critics as one of the best rock albums of all time. These are the haunting, poetic sounds of Arthur Lee and Love: A House Is Not a Motel; Old Man; The Daily Planet; The Red Telephone; Live and Let Live , and the rest of the 1967 original

One of rock's most overlooked masterpieces, this third album by the L.A. folk-rock outfit led by inscrutable singer-songwriter Arthur Lee sounds as fresh and innovative today as it did upon its original release in 1968. With David Angel's atmospheric string and horn arrangements giving the work a conceptual underpinning, Lee explores mainstream America's penchant for paranoia ("The Red Telephone") and violence ("A House Is Not a Motel") with songs that are as sonically subtle and lilting as they are lyrically blunt and harrowing. Add two gems by Love's secret weapon, second guitarist Bryan MacLean ("Alone Again Or" and "Old Man"), and you've got one of the truly perfect albums in rock history.

There is a perkiness even in the really delicate songs like "Andmoreagain" and "The Good Humor Man He Sees Everything Like This" -the latter one of the most gorgeous songs about summer ever written. Even with the two rockers, "A House Is Not A Motel" and "Live And Let Live", the mood is subdued, the anger is controlled and aimed carefully like a pointed finger.

Then there are the really bubbly songs: "Between Clark and Hillsdale" makes you want to cha-cha past your own local bunch of sidewalk stores right after you get out of work while there're still a couple hours of summer sun left; and "You Set The Scene" has to be one of the greatest signature songs of the era. It's one of those majestic march of life songs.

Our singer, even in his darkest moment of loneliness where he is talking/longing to an old photograph of a girlfriend (and who among us has never experienced this?), is able to rally an existential optimism of being part of a greater whole-life. Well, when you listen to the song, you see what I mean.

"Alone Again Or" is a song originally recorded in 1967 by the group Love and written by band member Bryan MacLean. It appears on the album 'Forever Changes', and was released as a single in the USA, UK, Australia, France and Holland.The essence of the song is the contrast between the positivity of the tune and the bleakness of the lyrics, with the chorus "And I will be alone again tonight, my dear" finishing with a lone acoustic guitar, closing the song with the opening melody that sounds anything but ecstatic, ending with an E-minor plus 2 chord.