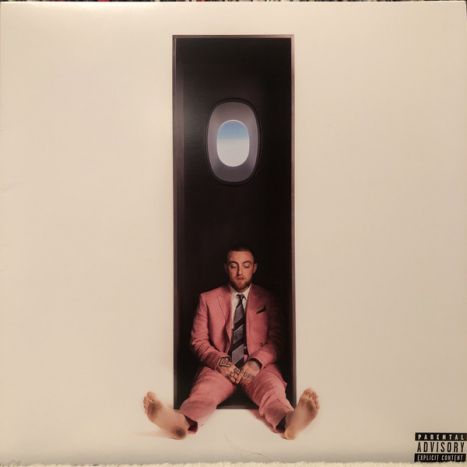 Swimming is the fifth studio album by American rapper and singer Mac Miller and his last album to be released during his lifetime..

( pitchfork) " Even at Swimming’s bleakest—“Self Care/Oblivion,” a dispiriting account of his pain-numbing regime, or “Hurt Feelings,” which shines some light on his mental state during that DUI—Miller resists the suggestion that anybody in particular is to blame for him bottoming out. The furthest he’ll go is acknowledging life was a lot easier with Grande than without her. “She put me back together when I was out of order,” he admits on “Perfecto.”
This sort of heartsick longing is not exactly something new—in 2018, you can’t toss a stone without it landing in some chart-topping sad rapper’s styrofoam cup. But Miller explores his headspace with considerably more focus than Drake, Future, or Post Malone, artists who sometimes cut emotional corners in their rush to the next banger. An album with nothing but time on its hands and an understanding that healing is a slow, tedious process, Swimming is most engaging when it details the simple things Miller tells himself to keep his spirits up. “Every day I wake up and breathe/I don’t have it all but that’s all right with me,” he sighs on “2009,” even though he only sounds half-convinced.
He’s come a long way since his overbearing kid brother act of his early Blue Slide Park days. Where he used to mug over his music relentlessly, on Swimming he mostly lets the beats breathe, clearing ample space for the record’s peaceful orchestral swells and blushing keyboards. He’s also singing more than ever, and he sounds better than ever doing it. Modest as it is, his voice is expressive in ways his plainspoken prose could never be, capturing his resignation without turning sadness into a performative spectacle.
As always, Miller remains a step behind the prestige artists he emulates—Chance the Rapper, Anderson.Paak, and, increasingly, Frank Ocean, whose nonchalant songcraft looms large here. Swimming is less virtuosic than those artists’ recent works, but no less heartfelt, and the album’s wistful soul and warm funk fits Miller like his oldest, coziest hoodie. He may be unable to escape his own head, as he laments on the opener “Come Back to Earth,” but he’s decided to make himself as comfortable as possible while he’s trapped there."
More Information
Please sign in with your email address or Create an Account.
New Products
Compare Products
Compare
Clear All
You have no items to compare.
My Wish List
Last Added Items
Go to Wish List
You have no items in your wish list.
Vinyl Records Vancouver
Categories
Help
Quick Link
Newsletter