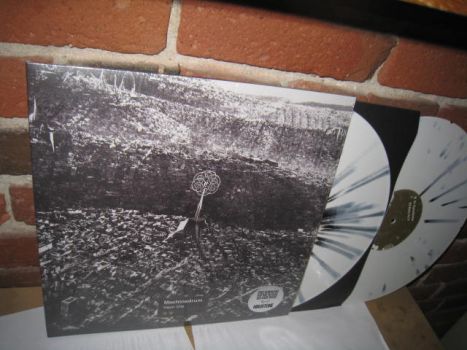 
A1 Gunshotta
A2 Infinite Us

Electronic music's Renaissance man Travis Stewart, better known as Machinedrum, returns with what could be his biggest and boldest release to date with label Ninja Tune. Vapor City is the first full-length offering since his critically heralded 'Room(s)' in 2011.

Conceptually based on recurring dreams he has had for years about a metropolis, Stewart has finally crafted a fully formed soundscape which doubles as a map into this imaginary universe. "'Vapor City' is an album inspired by a dream city," explains Stewart. "A collection of different songs each representing different districts in the city." The official video for 'Eyesdontlie' was directed by Weirdcore, who have provided visuals for M.I.A., Rye Rywe, Aphex Twin, Jamie Lidell, Simian Mobile Disco, Annie Mac, A-Trak, Chuck D (Public Enemy) and any more.

Up until now his music has provided moments of brilliance and cunning artistry but lacked an idea or common motive. This is perhaps Travis' most complete and coherent release to date; the conceptual metropolis of 'Vapor City' is held together tightly by its vivid Burial-esque imagery.

Characterised by symphonies of cascading and euphoric synth lines with clattering off-centre beats, Machinedrum's highlights become the tracks that get lost in hypnotics before taking an unexpected and deeper change in direction around the 3-minute mark.

There is a certain formula within Travis' work that cultivates music which is currently sitting at the forefront of forward thinking electronic music but takes inspiration from jazz and hip hop.

I'd like to recommend seeing this guy DJ live; I saw him play at the Lightbox in Vauxhall and it still remains one of the coolest parties I have been to. Just simply great music.

On a final note, I cannot stop listening to the second track. It's infectious.

Machindrum does Burial-gone-Footwork on two moody blue rides for Ninja Tune. Warmest '95 jungle pads dry ice the room for double-timed drum flux and class vocal cut-ups in the sweeping, emotional topography of 'Eyesdontlie', and 'Body Touch' leans in with a tuffer mix of tense but swangin' Hip Hop drums and Dillinja-esque D&Bass rollige.

Eyesdontlie slows the producers roll down ever so slightly, eschewing the footwork finesse of his last solo LP2011 Room(s)for a skittish drum n bass beat and a chorus that seems to be spiraling off into a break-driven black hole. Definitely a must for any of you who spent the 90s in a jungle-induced K-hole.

Weirdcore worked with the midi data from the track and used the track stems to create the video. The neon images react to the midi and some of the distortion is reactive to the sound as well. "Eyesdontlie" represents the Fenris District, the darker sleazy part of Vapor City.

Our brand of 'deep' doesn't just comprise of the 120bpm four to the floor tempo range. We're actually quite interested in the polyrhythmic music of some other artists. Recently, both Four Tet and Machinedrum released albums. Although they wouldn't quite fit in any of the DJ-sets that we absorb on a daily basis, we love the creativity they use in their rhythm tracks.

In Machinedrum's case, his most recent effort (Vapor City) can be interpreted as a story of love and loss, from a track called Infinite Us, to tracks called Rise and Fall and U Still Lie. The pivotal track (Center Your Love) has some influences of classic house, a mellow vibe and that signature polyrhythmic touch.

Machinedrum - Baby Its U