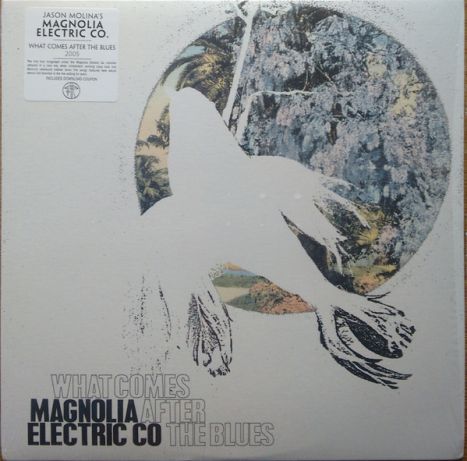 Magnolia Electric Co - What Comes After The Blues

SC102LP on sticker
Barcode and Other Identifiers

Here's what's confusing: Jason Molina, main guy behind Magnolia Electric Co., was, in a previous incarnation, Songs: Ohia, which put out the widely praised 2003 LP Magnolia Electric Co . Regardless of what handle he's recording under, thoughand there have been manyMolina's sound maintains a certain earthy, tumbleweeds-and-troubled-times integrity that doesn't appear to be winding its way toward beach blankets and sunny skies.

If you are familiar with the likes of Mercury Rev's Deserter's Songs and Will Oldham's Viva Last Blues, you'd better step to this pronto. Based largely around Jason Molina's tremulous vocals, with perfectly measured dabs of electric guitar, bass, drums and - oh, yes - piano adding to the atmosphere, it is another instalment in the fantastic road trip that began with The Band The Band. Travelling along that great cosmic highway, it spends a night at the Motel Tonight's the Night to be sure, but all those Neil Young comparisons really miss the point. MEC are their own thing, and they have considerable greatness in them. The companion piece to this - Fading Trails - is also superb,

But that's to its advantage. Where the late-90s indie rock brigade bulldozed their own mud-caked interpretations of Harvest-era folk into the ground, opening the door for the resurgence of retooled 80s pop, Molina's rotgut-steeped rock betrays a haunting! authenticity that won't soon lose its flavor. The gratifying opening guitar storm of first track "The Dark Don't Hide It," in fact, could fuel a real-rock turnabout on its own.

Molina died on March 16, 2013, in Indianapolis as a result of alcohol abuse-related organ failure. He was 39.
Henry Owings, a friend of the musician, published an article on his online music magazine Chunklet that said Molina had struggled with alcoholism for most of the decade leading up to his death. Owings also wrote that Molina had "cashed out on Saturday night in Indianapolis with nothing but a cell phone in his pocket