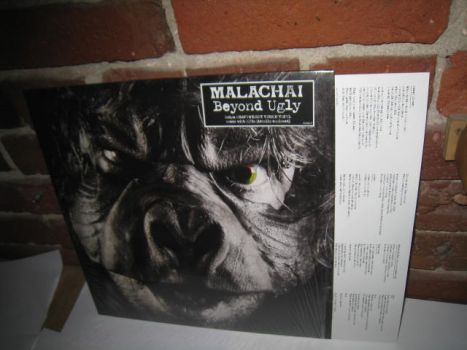 
When eminent Bristol tricksters Malachai wrapped up their promotional campaign for 2011's Return to the Ugly Side, it was unclear whether or not the duo would be heard from again. Members Gee Ealey and Scott Hendy drifted apart as bands frequently do, and it took a chance meeting several years later to reignite interest in adding another chapter to their story. What is now deemed the third and final installment in their "Ugly" trilogy, 2014's Beyond Ugly revisits Malachai's vivid world of retro-sonic pastiche and dark, urban storytelling.

Wasting no time, Beyond Ugly hits the ground running with the wild, riff-heavy opener "Sweet Flower," an energetic murder rave-up that has singer Ealey spitting fire within the album's first 30 seconds. As with their two previous releases, the album follows a trail of genre-bending samples and live instrumentation that touches on everything from dub to Bollywood, all nimbly stitched together by Hendy's crafty, psychedelic edits and Ealey's laddish, ringleader vocals. The renewed vigor in Malachai is apparent throughout as they turn in what is possibly the heaviest record of their career.


Sludgier cuts like "Holes" and the instrumental "White Nuthin' Sky" share an edgy overall sonic patina with slightly lighter fare like the excellent, waltzing "Hear It Comes" and the '60s pscyh-pop of "The Love." Hendy's deft crate-digging still owes a debt to '90s forebear DJ Shadow, and the lonesome sonic texture of Portishead lies ominously across the music courtesy of longtime supporter (and now collaborator) Geoff Barrow, but the thematic elements of the Ugly series and Ealey's strong vocal presence often play out more like a rap saga. Regardless of where you place them categorically, Malachai are deeply entertaining and Beyond Ugly shows that one more dip into the well was indeed a good move for the band.