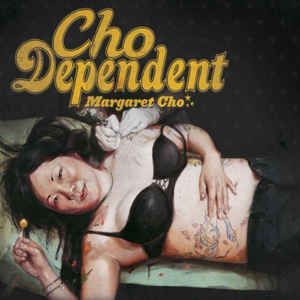 
Margaret Moran Cho (born December 5, 1968) is an American comedian, fashion designer, actress, author, and singer-songwriter. Cho, of Korean ancestry, is best known for her stand-up routines, through which she critiques social and political problems, especially those pertaining to race and sexuality. She has also directed and appeared in music videos and has her own clothing line. She has frequently supported LGBT rights and has won awards for her humanitarian efforts on behalf of women, Asians, and the LGBT community.

Filmed during a live performance in Atlanta, Georgia, this hilarious concert features the comedienne's uncensored views on sex, drugs, and rock & roll. Margaret skewers the politics, reality television, "sexting," her mother and more in a gut busting performance of all new stand up and comedy songs from her Grammy-nominated album, "Cho Dependent."

The idea behind getting big name musicians and turning out a well produced album is all there for Cho; however, comically it does not deliver. Dont get me wrong, the songs are great. Theyre just not that funny. Cho enlists her friends Ani DiFranco, Fiona Apple, Tegan and Sara, among others, to assist in the album with each big name musician playing his or her part perfectly. Chos part, unfortunately, lacks the humor that makes her successful on stage.

Reading the track list looks almost like a traditional comedy album, whereas Cho is on stage doing what she does best  talking and joking about these topics. Intervention, Calling In Stoned, Your Dick, Gimme Your Seed, My Puss, etc. seem great and all but Chos stand-up audience may find it difficult to embrace this project, especially if they have put up money to buy it.

Fans of the guest singers and musicians may like this album more so than Chos fans because they get to see them in a different, more lighthearted nature. In Chos defense, this seems to be experimental. The song My Puss did so well on YouTube that Cho integrated more music in her act. And thats fine; these songs are probably meant to be seen live.


On record, however, Cho Dependent lacks that intimacy that stand-up brings. I may be way off because my expectations were so high for this album. Its hard to listen to it as a standalone because listeners and fans take all things in consideration. Whats ironic about this is that Cho is so funny on stage that it, in my case, hurt the album because that expectation of funny doesnt transcend to the record. It may in fact be a hilarious album; its just not Cho stand-up funny.