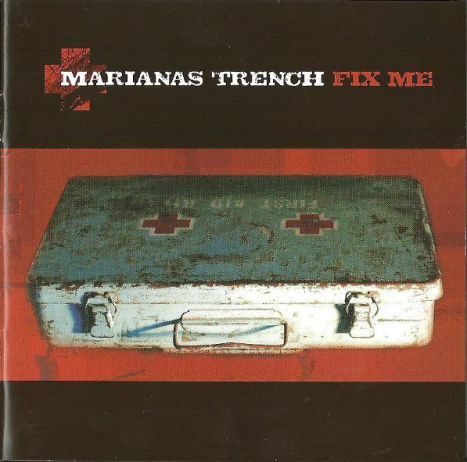 Mariana's Trench's debut album Fix Me struck me as a more unique, slightly rougher than Masterpiece. A combination of West Coast alt-rock infused with elements as diverse as the Beach Boys and Foo Fighters make this band my personal favourite. Every track on this LP deserves to be a single in its own right and many of them have the 'rock anthem' quality of the best of Coldplay.


I first heard of Marianas Trench via Much Music with their song "Decided to Break It", and I was extremely impressed by the vocal flare the band exhibited(the video is also hilarious), and I figured I'd better investigate further. That took me to their video for "Say Anything", the first single off their debut album, "Fix Me"(604 records). Being fairly impressed by the material I'd heard, I decided to go out and buy the album. Immediately I felt the connection(which is somewhat rare for me, it usually takes a few listens). And though admittedly this music has strong casual appeal and that simple fact may scare some off(I don't know why), I find it impressive how it stands out among the current pop/punk/rock/emo scene.

Firstly, the production is top notch, super high quality in every way. But not fake, these guys are known for their tight live act. This band wasn't glued together by a bunch of record execs, it was relentlessness. There are some entertainers who make music to expand their "brand", and while Marianas Trench intentionally makes music that will appeal to a wide audience, it's all work they believe in.

There is such a thing as sticking to your creative ambition while at the same time, allowing for flexibility; Fix Me proves it. And the music was recorded purely based off of the talent of the band, not software tools. Says Josh Ramsay: ""We didn't do an ounce of that on the record." It's all actual performances; it hasn't been doctored whatsoever. I think that's a big truth about us that not a lot of other bands can say these days." And it's the truth, it's hard to be enthusiastic about a band that you know you just couldn't enjoy live, because they suck without software manipulation.

The entire band is comprised of professional vocalists, as shown in their wicked harmonies. Lead vox' Josh Ramsay pours heartfelt, tortured passion into every lyric in songs like "Alibis" and "Skin & Bones", while Matt Webb joins in for a little fancy vocal matching in "Decided to Break It." There are layers and layers in the production of this record, it isn't sparse or stale like so many other records. But perhaps the greatest thing about Fix Me is that it so successfully combines all the flare of pop and hard rock. Hooks all over the place, almost every song could be a radio success. Not one track here is lacking, it's pure quality musicianship.

Whether you're into "emo", or any pop punk bands in general, you should dig Marianas Trench. If you like rock, I think you'll enjoy this quite a bit.


Marianas Trench - Decided To Break It Behind The Scenes

this song is so beautiful. it should have been a single