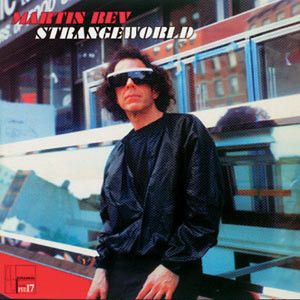 Cover is VG+ has ringwear, 2 inches of sticker wear close to the top edge and half inch close to the bottom left (back cover), cornerwear in all the corners (see our pic)

Martin Reverby, better known by his stage name Martin Rev, (born December 18, 1947) is an American musician and one half of the influential synth-punk band Suicide. Rev has also released several solo albums for a number of record labels, including ROIR and Puu. His style varies widely from release to release, from harsh and abrasive no wave (Martin Rev) to light bubblegum pop (Strangeworld) to heavy synthesizer rock (To Live).
Rev also works with Stefan Roloff, doing soundtracks for Roloff's video work. He contributed to the Raveonettes' 2005 album, Pretty in Black.
In 2008, while Martin was working on the album Stigmata, his wife Mari died. The album, dedicated to her, is strong in religious imagery with most songs being titled in Latin. Kris Needs called the album a "brilliantly executed excursion into modern electronic classical music".

"Martin Rev is known as the music-writer half of the legendary NYC duo Suicide, who pioneered a revolution in electronic sound in the late 1970s. Suicide's rough hypnotic and minimalist sound paved the way for most of the electronic bands of the 1980s and set the base for the following emergence of techno/electronica. In his solo career, Martin Rev has released three albums so far, his last in 1997. As a solo artist Rev, who was originally a free jazz keyboard player, has a more melodic sound than Suicide. Strangeworld is a collection of his new songs from the past few years, all of them previously unreleased. All the production, instruments, and vocals are done by Rev himself. The bare sounds of synths and electronics, his delicate voice and manner of singing, makes Strangeworld a very honest and intimate album. One cannot avoid the impression that Martin Rev has seen life from enough different sides to know what he's singing about."