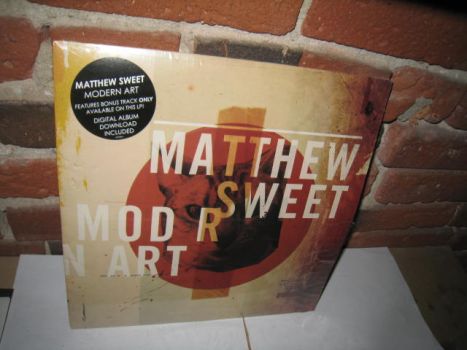 
A1 Oh, Oldendaze!
A2 Ivory Tower
Drums  Fred Armisen
A3 She Walks The Night

Those of you that don't "get" this album need to understand that this isn't Matthew Sweet in his usual "hooky, power-pop, formulaic arrangements" form. The title itself should clue you in. This album is intended to be a bit abstract, with unusual arrangements, melodies and arrangements. It isn't intended to catch your ear on first listen. In short: it's an experimental record.

If you're looking for yet another version of "Girlfriend" you will be sorely disappointed. However, these songs reveal new layers of richness on each play and rewards those with the patience to really listen (more than once).


There is definitely a trend toward melancholy here (When Love Lets Go, A Little Death, Modern Art), but it's also not without it's share of great rockers (Ladyfingers, Late Nights With The Power Pop, and the Byrds-like, She Walks The Night).

Granted, some of the experiments here don't always pay off, but what we have here is a mostly wonderful album for those with an appreciation for the abstract in music and the patience to give it a real listen.

By the way, if you think 100% was the last good Matthew Sweet album, you should probably stay away or buy the deluxe edition of Girlfriend instead.

I find all these negative reviews perplexing. I just don't hear it...and I'm not someone who tolerates musicians when they get too self indulgent. Sure there is some experimentation going on here, but I find it makes the album more interesting when listened to as a whole.

Some have suggested that all the songs are weak and not memorable. As far as I'm concerned this just isn't the case. Several songs are instantly enjoyable. She Walks the Night, Oh Oldenaze, When Love Lets Go I'm Falling, Modern Art, Ladyfingers, Baltimore are songs that you don't have to struggle to like.

They don't need to grow on you. They jump out as strong songs, performed interestingly with cool melodies and nice harmonies. The album has its own sound. It's not Girlfriend, 100% Fun, Altered Beast or In Reverse. It's Modern Art -- a strong new album with a solid song set and touches of experimental production. The production and arrangments are akin to the loose expirmental techniques the beatles and beach boys invented back in 1967/68 that were later used by groups like XTC. There's no reason to shy away from catchy and interesting music like this.


Throughout a career that stretches back to the mid-'80s, Matthew Sweet has never followed trends, though his landmark 1991 album Girlfriend was responsible for starting one; in fact, many critics note that most power pop records made during the '90s owe a tremendous debt to Sweet. Two decades after the release of that iconic album, Sweet has once again swung for the fences and connected with the boldly experimental, yet deeply personal Modern Art.


Defiantly unorthodox, but often playfully so, Modern Art features 12 new compositions of Sweet's trademark wistful, yearning pop that recall some of Sweet s touchstones: the Beatles, Beach Boys and Big Star. ''She Walks the Night'' is reminiscent of earlyperiod Byrds, while ''Ladyfingers'' stomps along with the authority of T. Rex. Other standout tracks include the swirling, psychedelic ''Oh, Oldendaze!,'' the ruggedly assertive ''Late Nights With the Power Pop,'' the acerbically witty ''Evil By Design, Goodbye Nature'' and the sweetly soulful ''Modern Art.''


Longtime musical cohort Ric Menck (Velvet Crush) does all the drumming on the album (except for ''Ivory Tower,'' which is built on a random drum pattern supplied by Sweet's friend, actor/musician Fred Armisen). Dennis Taylor s deft and urgent guitar lines serve as a running commentary to Sweet s introspective singing. Finished by mastering engineer Glenn Schick, Modern Art promises to be another trend-setting release by Sweet.

Matthew Sweet - She Walks The Night