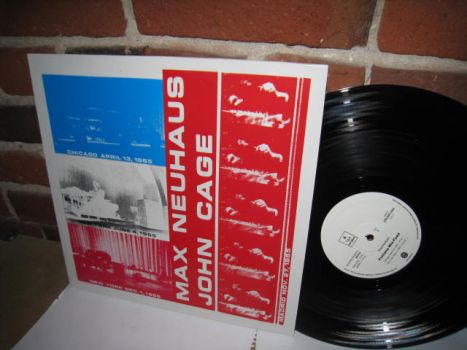 
Max Neuhaus began his music career as a virtuoso percussionist and performer of new music.' He later became one of the guiding lights of the art form he termed sound installation,' or the embedding of sound in a fixed space. This recording finds Neuhaus in the transition period from percussionist to composer/installation designer. Hes still using drums, but with extremely unconventional technique, and incorporating the sound of the room into the piece, foreshadowing his future work.


Cages score for Fontana Mix essentially consists of instructions for making your own piece, using transparencies and graph paper to plot the path of your collaborative work. Neuhaus composition, subtitled Feed, attaches contact microphones to the heads of percussion instruments, which pick up the sound of the room. This signal is then amplified and pushed through speakers that face the percussion instruments, causing both the instruments and microphones to vibrate and move. The resulting feedback loop (at that time a relatively new discovery) became the musical content of the work, and was different every time it was performed, dependent upon the instrument amplified, the number of people in the space, and the shape and size of the room itself  all despite the fact that Neuhaus score was the same every time.


So how does it sound? Well, people not accustomed to finding the beauty in feedback would say, godawful noise. Although on the surface the pieces seem like (relatively) unchanging drones, each has a very distinctive character. Close and extended listening reveals all kinds of micro-structures, interference patterns and rhythmic vitality that are created by the chance combination of the above elements. As a reviewer for the New York Times said after one of the performances enclosed, This piece [is] not the kind of electronic music that emanates distantly from speakers. It [feels] as though ones own head were part of the feedback circuit. Play this as loud as you can without cracking your head open.