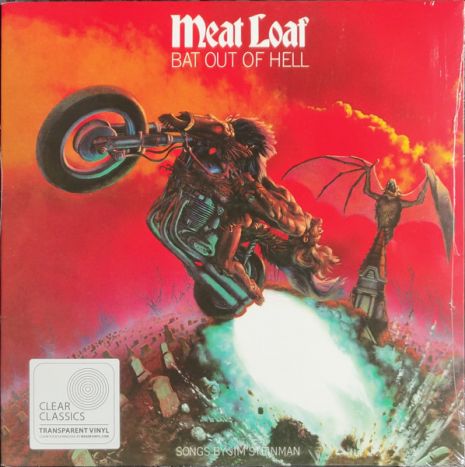 Label: Epic – 19439802121, Legacy – 19439802121, Cleveland International Records – 19439802121
Series: Clear Classics
Format:
Vinyl, LP, Album, Reissue, Repress, Clear
Country: Europe
ReReleased: Feb 5, 2021
Barcode: 194398021218
Mastered By – Joe Brescio
Genre: Rock, Pop
Style: Classic Rock
1977 Release
Genre:
Rock
Style:
Pop Rock
Tracklist
A1 Bat Out Of Hell
A2 You Took The Words Right Out Of My Mouth (Hot Summer Night)
A3 Heaven Can Wait
A4 All Revved Up With No Place To Go
B1 Two Out Of Three Ain't Bad
B2 Paradise By The Dashboard Light
B3 For Crying Out Loud
Arranged By – Jim Steinman
Arranged By, Engineer, Mixed By – Todd Rundgren
Mastered By – Joe Brescio
Producer – Todd Rundgren
Songwriter [Songs By] – Jim Steinman
Vocals – Meat Loaf
Dedicated to Wesley and Wilma Aday and Louis Steinman.
Edgar Winter appears courtesy of Blue Sky Records.
Todd Rundgren, Kasim Sultan, Roger Powell and John Wilcox appear courtesy of Bearsville Records.
Album Conceived by Jim Steinman and Meat Loaf.
Bat out of Hell is an extremely successful album by Meat Loaf and Jim Steinman, released in 1977, and produced by Todd Rundgren. Its musical style is influenced by Steinman's appreciation of Richard Wagner, Phil Spector and Bruce Springsteen.
Although not an immediate hit, the album has become one of the biggest selling of all time. It sells about 200,000 copies per year and has sold an estimated 37 million copies worldwide. Rolling Stone magazine ranked it at number 343 on their list of the 500 greatest albums of all time.
The phrase "bat out of Hell" can be traced back to the Greek playwright Aristophanes' 414 BC work entitled The Birds.
In it is what is believed to be the first reference to a bat out of Hell.
The title track begins with jarring , jamming keyboards, rocking guitar that more or less reflects the hard-rocking tone of this all-time classic. The main character here is someone who takes life by the throat in the dark, riding a "silver black phantom bike." With the line "When the motor is hot and the engine is hungry", I'm not sure whether he's talking about the bike or himself, such is the hunger of the main character. And even finishing ten seconds shy of ten minutes, it isn't excessive--worth every minute.
The opening narrative between "the wolf with the red rose" and the girl, probably Ellen Foley, in "You Took The Words Right Out Of My Mouth" is quite something. The question, "On a hot summer night, will you offer your throat to the wolf with the red rose?" After she presses him with all these questions, such as "Will he love me?", "Will he starve without me?" and having been replied in the affirmative, she finally answers his original question, repeated, "yes." He says, "I bet you say that to all the boys." What a punchline! Hey, women are like that! It bursts into an operatic blaze of sound, the setting being a hot summer night on a beach, where the girl does the title action, just when he was going to say "I love you." The chorus is done a capella with handclaps at the end, in contrast with the rest of the song.
In "Heaven Can Wait", a sweet tender ballad, our main character, is feeling tamed by the girl, whom he equates with paradise. Fate has a funny way in things, as he says, "I got a taste of paradise/If I had it any sooner, you know I never would have run away from my home."
"All Revved Up And No Place To Go" begins with a throbbing bass rhythm punctuated by Edgar Winter's sax, before going into frantic mode towards the final minute of the song.
The sad and heartbreaking "Two Out Of Three Ain't Bad" is a narrative of a man telling a girl why he can't love her, all beacause of some woman in his past who told him what he's telling her now: "I want you/I need you/But there ain't no way I'm ever gonna love you/Now don't be sad/'Cause two out of three ain't bad." Yeah, but what a poignant one out of three!
Then comes the all-time gem of the album--"Paradise By The Dashboard Light," an intense rocker punctuated by alternating by operatic power choruses. The story is well-told on classic rock radio, a one-night stand, one night love affair, call it what you will, hijacked by the girl who demands a more lasting committment before she puts out. Leave it to a woman to spoil things! Kidding! And when Ellen Foley shouts "Stop right there! I gotta know right now!" you better listen up! The tempo really kicks up and the tension builds up especially when Ellen confronts him: "What's it gonna be, boy? Yes or no?" And it keeps up when Meat Loaf responds with "Let me sleep on it." What a pressure cooker! Professor Bittan's piano is unmistakable here.
"For Crying Out Loud", which for a while has only Bittan's piano, later explodes with the NY and Philly Harmonic Orchestra. As for the live tracks, the guitar instrumental intro, "Great Boleros Of Fire," is a prelude to a live version of the title track.
Well-known musicians: Todd Rundgren on guitars and sometimes on keyboards and backing vocals, "Professor" Roy Bittan, best known on Springsteen's E. Street Band on piano, drummer and fellow E-StreeterMax Weinberg, Jim Steinman himself on keyboards, Ellen Foley contributing backing vocals, and on the live tracks, Bruce Kulick, later KISS's guitarist.

Meat Loaf can really belt out those powerful tunes, but can be equally tender on the slow songs. A masterpiece, what else can I say?