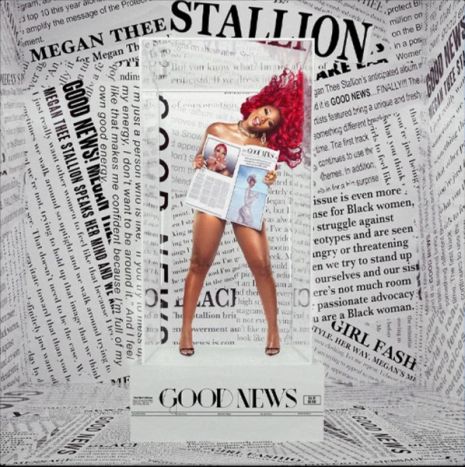 Skip to the beginning of the images gallery
Details
Megan Thee Stallion – Good News
Label: 1501 Certified – none, 300 Entertainment – none
Format:
2 x Vinyl, LP, Album, Cloudy Blue Clear
Cloudy 2xLP Variant of 'Good News' by Megan Thee Stallion on Vinyl. Includes exclusive Good News newspaper inner sleeves and gatefold pop out.Barcode (Text): 810043683746
Country: US
Released: May 2021
Genre: Hip Hop
Style: Trap
A1 Shots Fired 2:51
A2 Circles 2:51
A3 Cry Baby
Featuring – Dababy 2:18
A4 Do It On The Tip
Featuring – City Girls, Hot Girl Meg 2:47
A5 Sugar Baby 2:27
B1 Movie
Featuring – Lil Durk 3:47
B2 Freaky Girls
Featuring – SZA 2:47
B3 Body 2:51
B4 What's New 2:35
C1 Work That 2:15
C2 Intercourse
Featuring – DJ Mustard, Popcaan 3:17
C3 Go Crazy
Featuring – 2 Chainz, Big Sean 3:45
C4 Don't Rock Me To Sleep 3:03
D1 Outside 2:32
D2 Savage (Remix)
Featuring – Beyoncé 4:02
D3 Girls In The Hood 2:34
D4 Don't Stop
Featuring – Young Thug 3:08
(Pitchfork) "So, on her latest release Good News, after some scathing record-straightening on “Shots Fired” over the same sample Biggie used in his alleged Tupac taunt “Who Shot Ya?” and more nebulous grievance-airing (fake friends and pesky men) over the New Orleans bounce of “Circles,” Megan turns her attention to more pressing matters. She goes from reducing her assailant’s bullets to mere pellets to ribbing someone who she’s fucked so good he’ll want to wear her hoodie. Once she moves on from this summer’s shooting, she rarely looks back. Her beats are more playful and poppier than ever but anchored in rap and R&B staples. Her rapping is still razor sharp, littered with punchlines and barbs that make your ears perk and jaw drop. Her disposition is unexpectedly chipper. In a year in which a virus, a man, and a cadre of misogynistic spectators could have killed her, Good News is a celebration of life.
When the album ends with the massively successful “Savage Remix,” plus singles “Girls in the Hood,” and “Don’t Stop,” it feels exultant, like confetti falling from the ceiling for an encore at Madison Square Garden. The 14 tracks that precede them are varied—slinky and sexy, dance-routine ready, or throbbing with 808s—which makes sense, given there are more than 14 producers helming Good News, compared to Megan’s usual two, Lil Ju and Juicy J. Here, the pair is joined by high profile beat-makers like Tay Keith and Mustard, as well as Dutch upstart Avedon, who comes out swinging on standout “What’s New.” The producers’ diverse approaches are unified by their optimism, a novel tone for Megan.
The pulse of the album is steadily upbeat, which might appeal to the casual hip-hop fans she’s collected through the viral “Savage Remix” more than those from Make It Hot, Tina Snow, and Fever. Smartly smuggled towards the end of the new releases (almost as if not to distract) is “Don’t Rock Me to Sleep,” a bold sing-along experiment with the same Day-Glo airy synths that Dua Lipa and The Weeknd use to evoke ’80s nostalgia. It’s the kind of song that any of today’s pop stars could make, and it’s ill-fitting on Megan. The similarly poppy follow-up “Outside” works better, maybe because it’s tougher, which feels like a more natural pose for her. “I ain’t for the streets, ’cause bitch, I am the street,” she huffs"
More Information
Please sign in with your email address or Create an Account.
New Products
Compare Products
Compare
Clear All
You have no items to compare.
My Wish List
Last Added Items
Go to Wish List
You have no items in your wish list.
Vinyl Records Vancouver
Categories
Help
Quick Link
Newsletter