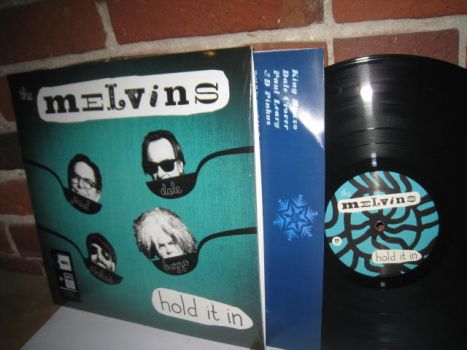 
Recorded at Sound of Siren Studios, Haasienda Studios, and Preacher Mon.
The songs "Eyes On You" and "House Of Gasoline" are listed on the back cover but do not appear on this vinyl release of the album. Both tracks can be found on vinyl on the "Bride Of Crankenstein" 10".
Colored inner sleeve with photos, graphics, release notes.
Contains download code.


If you're reading this then you already love the Melvins. This is another strong Melvins release. Just like the earlier releases which featured the Big Business guys the new "new" members Paul Leary and Jeff Pinkus make recognizable and enjoyable contributions. As always weirdness abounds. This album is mostly heavy guitar metal/grunge/rock with a few forays into melodic pop and maybe what you'd call texas boogie. Mostly it's hard, loud guitar w/aggressive vocalizing from all involved. Very good release! The Melvins are a challenging band to follow and at times I have mixed feelings about their latest product but this one is pretty solid all around.


"Hold It In" is the Melvins core (Dale and Buzzo) combining forces with the Butthole Surfer's bass and guitar (Paul and Pinkus). Not unlike their first pairing with Big Business, the Melvins focus on rocking out as much as possible on the debut from this new 4 man line up. Those familiar with both bands will not be surprised at the large amount of weird noises and vocal filtering present on this album, but I'm very happy to report that all that stuff never gets in the way of an album full of great songs. There's only two moments of sonic meandering, but the first doesn't last too long and actually leads into a song and the second closes out the album in a long jam that sonically lands somewhere between a haunted house and the soundtrack to Eraserhead.

In general though, you get some excellent new Melvins tracks, 30+ years later Dale continues to destroy on the drum kit and Buzz continues to be a never ending riff fountain. This time out the more Melvins-y tunes hover around the sea-sick mid-tempo chug variety but we also get a few left field turns clearly inspired by the new lineup (three tracks are actually credited to Paul Leary alone with Buzz and Dale NOT involved), including a straight up pop song sang by a robot while under water ("You Can Make Me Wait" with Crover doing his best Ringo impression on the kit), and a very Motorhead-esque rocker in "Nine Yards."

While this is some of the absolute catchiest material the Melvins have ever put out (trust me, more than any other Melvins tunes these songs will be in your head for days and days), the crazy guitar tones not to mention all the vocal filters and layers will make sure none of these tracks will ever make it to radio, and also assures all us fans that the Melvins are indeed still the Melvins.

In short, this is a loud, hard rockin' new LP from the greatest rock living rock band and any fans reading this should not hesitate for a moment to pick it up, its easily in the top 5 albums they've done since they've been on Ipecac.

Anyone else wanting a good, idiosyncratic modern rock/metal album shouldn't be disappointed either, again this is an extremely catchy, agressive album and the emphasis this time out is very much on songs.