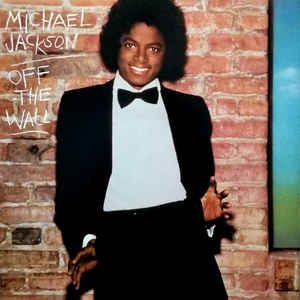 Michael Jackson - Off The Wall

When Michael Jackson released Off The Wall in 1979, he was a mere 21 years old, but he had been in the business for a decade. He had released several solo albums and singles (even topping the charts with "Ben" in 1972), but they were under the control of Motown. Off The Wall was his first real solo release as he was in charge. Mr. Jackson was always thought of as an unique talent, but he blew away everyone's expectations with the album. The album has a definite dance vibe, but although disco was at its height of popularity, the album doesn't fall in the disco category. The songs have fat grooves that make you want to dance, but the core of the songs belong to Mr. Jackson and not the production as is the case with most disco songs.

"Don't Stop 'Til You Get Enough" is the album's first track and single. It is a brilliant track with soaring strings and popping rhythms that has a spoken word intro that moves into a high falsetto. Mr. Jackson sings the song in the falsetto, but he interjects spoken word into verses that provide an echo to the lead. The song was a justifiable number one hit. "Rock With You" was the second single and is much slower in its beat, but you can still groove to it. It also topped the charts. "Working Day & Night" is a musical workout that sounds like a forerunner of "Wanna Be Startin' Something" from Thriller.

"Get On The Floor" is a fiery call to arms that in which he doesn't ask that you get up and dance, but demands it. The title track has a funky vibe to it and "Girlfriend" is a Paul McCartney song that is pumped up a bit from its slight original, but is still the weakest track on the album. "She's Out Of My Life" is a straight ballad that is sung with heartbreaking sincerity. In fact Mr. Jackson literally broke down while singing it and you can hear the sobbing on the song. "Burn The Disco Out" closes the album in apocalyptic fashion and is a perfect capper to the album. Off The Wall was a major success that spawned four top ten hits, sold over 10 million copies but surprising never hit number one on the album charts, topping out at number three.