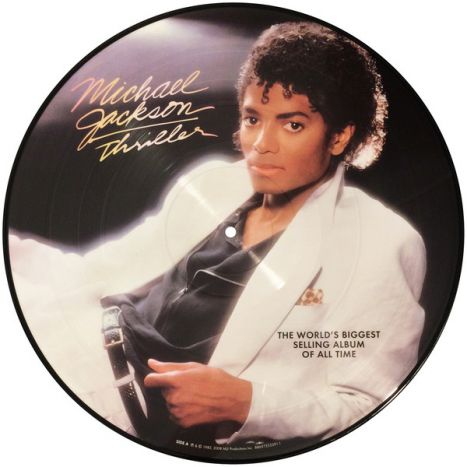 This variant does not include the 25th anniversary logo on the picture disc.

The album crosses across all music genres and gives the listener a little bit of everything. There's pop, rock, r & b and dance rhythms; slow, fast and midtempo songs. "Wanna Be Startin' Something" gets the album moving. It's a disco inferno and builds up to a chanting crescendo. The next two songs slow things down after the frenzied opening. One of the two non-singles,

"Baby Be Mine" is a nice mid-tempo song and then comes the superstar duet with Paul McCartney "The Girl Is Mine".
The song shows off both the artist's vocal talents as they trade verses fighting over a girl's affection. You can almost see the song as a passing of the torch from the Beatles to Jackson as the world's biggest act.

The humorous "Thriller" follows and it contains Vincent Price's debut as a "rapper".

"Beat It" is the song that pushed the album into the cultural phenomenon that it was. By employing guitar god Eddie Van Halen on the song, Jackson was able to break out of the mold of an R & B artist and reach a vast white audience. Jackson showed he was able to transcend all labels and reach listeners of all colors and musical tastes.

The first number one song on the album follows. It was a searing performance of the song, "Billie Jean", on the Motown 25th anniversary special that helped show Jackson's amazing dancing abilities and push album sales into the stratosphere.
It was also the first video by a black artist to gain major airplay on the predominately white MTV, setting the stage for other black artists like Prince to start reaching a more diverse audience. "Human Nature" is a pretty ballad..

"P.Y.T." is has more of a a hard edge.
His sister Janet sings back up on the tune.

The album closes with another ballad "The Lady In My Life". This album went on to sell 25 million copies and for a long time was the biggest selling album in history.

It almost single handily pulled the recording industry out of it late 70's, early 80's sales funk and made MTV into the marketing machine it is today.
It takes a very special album to do that and this is exactly that.