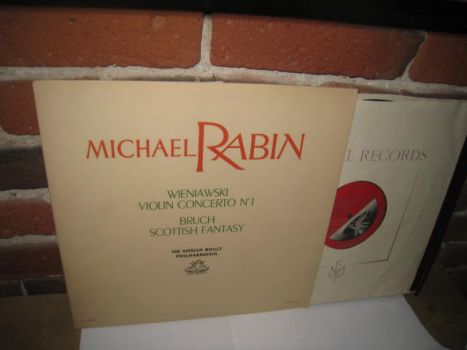 A Wieniawski, - Concerto No. 1 In F Sharp Minor

A1 Allegro Moderato
A2 Preghiera (Larghetto)
A3 Rondo (Allegro Gioioso)

Rabin was an utterly tragic figure who played the violin with ease. So many great or would-have-been-great musicians seem to die young - Neveu, Hassid, Kogan, Lipatti. The musical world had been deprived of a lot over the years.

I know there are a number of people out there who think Rabin was among the greatest, if not the greatest. Unfortunately, we will never know because of his untimely death.

Rabin was one of the greatest violinists, close to Heifetz' superlative playing. I think of him in the same bracket as Kogan and Yulian Sitkovetsky, because there are certain similarities in the playing of these three.
There's dramatic tension created by a performer struggling to surmount a difficult passage--but there's never a sense of anything being difficult for Rabin.
More Information
Please sign in with your email address or Create an Account.
New Products
Compare Products
Compare
Clear All
You have no items to compare.
My Wish List
Last Added Items
Go to Wish List
You have no items in your wish list.
Vinyl Records Vancouver
Categories
Help
Quick Link
Newsletter