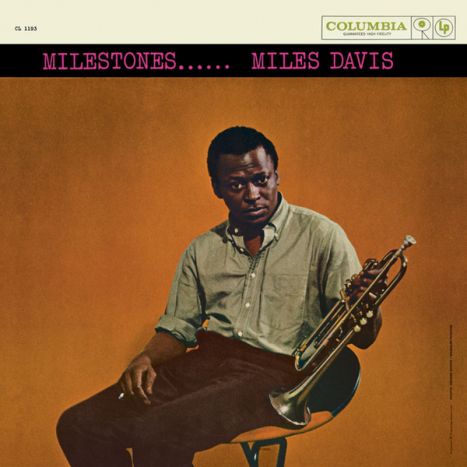 " but Milestones deserves special notice as a kind of warm-up to Kind of Blue, Davis' undisputed masterpiece and arguably the greatest jazz album of all time. It's Miles' Revolver to his Sgt. Pepper, a brilliant rough draft to a perfectly realized work of art, and it's fascinating to listen to, both in the context of that later great album, and in terms of its own greatness.

Elsewhere, most of Milestones' pleasures come not from what it foreshadows of Kind of Blue, but what it has to offer that the later album does not. For one thing, Milestones swings harder than any of Davis' later modal work, offering uptempo numbers from beginning to end, including a smoking version of Dizzy Gillespie's "Two Bass Hit" and an extended reworking of "Straight No Chaser" that locks into a much tighter rhythm than the casual shuffle of Thelonius Monk's original. Much of the credit for Milestones' rhythmic energy probably goes to the two musicians featured here who did not appear later on Kind of Blue, pianist Red Garland and drummer Philly Joe Jones. While neither was as talented as the men who replaced them, Bill Evans and Jimmy Cobb, both were forceful, distinctive players, well-versed in bop and swing, and this set showcases their strengths well. Listen especially to their work on the irrepressibly jaunty "Billy Boy", which also features a bowed bass solo from Paul Chambers that must have left a grin on every face in the recording studio.

It's also fascinating to listen here to the development of John Coltrane, who is already the flashiest and most technically proficient of the players on this album, but who is still struggling to find his voice, especially on a fairly traditional swing number like "Two Bass Hit" and the straightforward blues of Davis' other original composition, "Sid's Ahead". At times it's hard to tell him apart from the more conventional Adderley. But in places, especially on "Straight No Chaser", he suddenly cuts loose with one of his trademark "sheets of sound," and you catch a glimpse of the great innovator who would blow the jazz world out of the water in the years to come" ( popmatters)