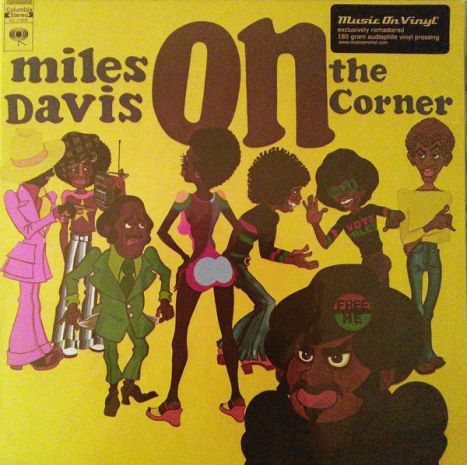 A sublime bit of Miles electric funk! This landmark album features Miles playing with Herbie Hancock, Chick Corea, John McLaughlin, Dave Leibman, and Jack DeJohnette -- crafting a Sly Stone-influenced batch of funky tracks that predates most of Herbie's own electric 70s work, and which shows that the Bitches Brew approach could be honed-down, leaned-up, and driven into a tight little groove

Miles Davis most criticized and overlooked work. Between 1972 & 1974, he broke from the jazz conforms and went far out into the deep spaces of creativity with his experimental electric sound effects and a totally new stripped down improvisation style that was less then well received by the critics of the time.

Miles Davis music 72-75: the most mind blowing sounds ever. I'm obsessed with it. The most beautiful, funky, mysterious, aggressive,bluesy, hypnotic sounds ever made. I have countless bootlegs - it's miraculous how this band made what is essentially a jam in E flat sound different every night. I'll never get bored of it. Everyone in the band plays perfectly


Here are just of the three cats miles played with during that time, Dave Liebman, Pete Cosey and Michael Henderson

Miles On The Corner" discussion in the his garden

talking a bit of their memories followed by an Impromptu jam of the Coltrane homage "Miles Mode". Accompanied by a musical selection with relevant photos of that period.

Multicultural stinkweed from a man who literally turned music inside out more than once. It's off the 1972 On The Corner album, a piece designed to appeal to a generation in love with Hendrix and Sly. The experiment didn't quite bring forth the youthful adulation he'd hoped for but it's now considered one of his most illuminating works. Tune it up.