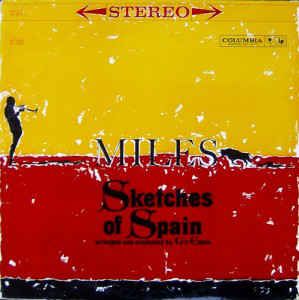 DETAILS: ...........THE UNIQUELY CREATIVE COLLABORATION BETWEEN MILES DAVIS AND GIL EVANS HAS ALREADY RESULTED IN TWO EXTRAORDINARILY EVOCATIVE COLUMBIA ALBUMS - THIS ALBUM IS NO EXCEPTION

Sketches of Spain wasn't the first jazz adaptation of a classical composition. A.B. Spellman, you know that Duke Ellington did it a few times. Art Tatum and Fats Waller loved playing the classics in the jazz style, as did many stride pianists and other jazz musicians over the years. But Sketches of Spain by Miles Davis and Gil Evans is different.

Sketches of Spain holds a unique place in the pantheon of jazz classics. On the opening cut, Gil Evans maintains a true fidelity to the original composition, which is "Concierto De Aranjuez." The mood that he establishes makes us feel like we're on a hill in Andalusia, watching the goings-on's of a gypsy camp. At the same time, there's this cool-bop lyricism that's all Miles Davis with its tone bubbles blasting around the place and all.

Gil Evans' orchestration is as original and as sensitive as Miles' solos. Evans once remarked that Miles had the only truly original trumpet sound since Louis Armstrong, and that point is well exemplified on this composition here, because the sound is tailored to fit Davis as impeccably as one of his suits. And the man could wear a suit.